Not gone and not forgotten, China is ready to solidify its claim to the South China Sea (SCS). Recent satellite imagery confirms China is conducting significant land reclamation operations in the Spratly Islands in the SCS. The SCS is an important fishing ground and is believed to hold large amounts of oil and gas. Undermining the United States' influence in the region, China intends to play the shepherd in one of the world's busiest trade routes.

The Spratly Islands along with the Paracel Islands and several maritime boundaries in the SCS have been hotly disputed for several centuries. The conflict includes Brunei, China, Indonesia, Malaysia, the Philippines, Taiwan, and Vietnam and has predominantly centered on historical and cultural claims. Though offering very little in the way of land or resources, the islands serve as a tangible marker. As such, parties to the conflict have been quick to occupy them.

China's most recent undertaking [1] in the Spratly island chain is not their first – the last 18 months have already seen three reclamation projects. However, at more than 3,000 meters and counting Fiery Cross Reef is their grandest venture yet and appears destined to house an airstrip and harbor, both capable of supporting military hardware. The Philippines, Malaysia, and Vietnam already operate airstrips in the Spratlys, but can only support smaller, prop-based aircraft.

As it pursues expansion, China has been hesitant to engage in multilateral negotiations and meaningful dialogue on the SCS was relegated to the sidelines at the recent APEC and ASEAN summits. Instead, China – demanding an in-house solution to the convoluted matter – is content to flex its superior political and military might to limited opposition. Reluctant to step on any toes and with its feet in multiple courts, the United States is short on political recourse, and that's how China likes it. 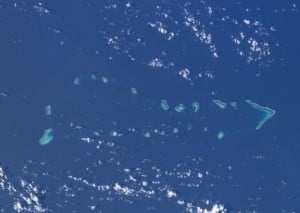 Though China's aims are long-term, control of the Spratlies and Paracels is not subsidiary to any prize that may lie beneath. Chinese President Xi Jinping's "Asian security concept" calls for Asian solutions to Asian problems and seeks to limit Western influence in such "domestic" affairs. Unchecked dominance in the SCS, whether through direct force or intimidation, would be a remarkable victory in this regard.

And to the victor go the spoils, which in this case are still pretty unclear, a side effect of the conflict itself. The Energy Information Administration estimates the SCS holds approximately 11 billion barrels (bbl) of oil and 190 trillion cubic feet (Tcf) of natural gas. That estimate jumps to as much as 22 bbl of oil and 290 Tcf of natural gas according to a U.S. Geological Survey study. Chinese National Offshore Oil Company (CNOOC) is perhaps the most optimistic and estimates undiscovered resources of oil and gas in the SCS total 125 bbl and 500 Tcf respectively.

To date, the SCS nations have been relatively successful drilling in their near-offshore waters. Malaysia and Thailand for example, have created [2] Joint Development Agreements to expedite production without addressing territorial disputes. For its part, China has largely played the provocateur. In 2011 and 2012, China offered a slew of oil and gas blocks to foreign bidders; the blocks – in contested waters – received no bids. More recently in May, China stationed its new deepwater drilling rig within Vietnam's Exclusive Economic Zone setting off a series of violent protests in Vietnam.

Disregarding today's low commodity prices, the SCS is a tough sell for Western majors unwilling to take sides. Shell and ExxonMobil have been the most active in conflict-free waters and any multilateral resolution favors their size and deepwater drilling experience.

Despite the uncertainty of the resources below the surface, there is quantifiable wealth above. Approximately 14 million barrels of crude oil and over half of the global LNG trade pass through the SCS daily. In all, $5.3 trillion in total trade moves annually through the SCS. With an aim to control no less than 80 percent of the sea, China may soon be able to impose its will on global trade patterns.

By Colin Chilcoat of Oilprice.com

EU firing negotiating shots over trade access? Of course they are

US Dollar: 'Reserve' to 'Laughing Stock' Currency in Less Than One Century