In the run-up to the international climate negotiations in Durban later this month, China has responded to efforts to ban the trading of widely discredited HFC-23 offsets by threatening to release huge amounts of the potent industrial chemical into the atmosphere unless other nations pay what amounts to a climate ransom.

From the Environmental Investigation Agency

China’s threat comes after the European Union and other nations moved to ban HFC-23 credits from internal carbon trading mechanisms in recognition of the perverse incentives created by these credits in the Clean Development Mechanism (CDM). The vast amounts paid for HFC-23 offsets have led to factories in China and elsewhere manufacturing more HCFC-22 and its HFC-23 by-product than necessary, just to maximise the amounts paid to destroy HFC-23 through the UN-backed carbon trading scheme.

In a shocking attempt to blackmail the international community, Xie Fei, revenue management director at the China Clean Development Mechanism Fund, threatened: “If there’s no trading of [HFC-23] credits, they’ll stop incinerating the gases” and vent them directly into the atmosphere. Speaking at the Carbon Forum Asia in Singapore last week, Xei Fei claimed he spoke for “almost all the big Chinese producers of HFCs” who “can’t bear the cost” and maintain that “they’ll lose competitiveness”.

China’s claim belies the fact that HFC-23 can be destroyed for just â‚¬0.17 per CO2e tonne. The destruction of one CO2e tonne generates one Certified Emission Reduction (CER) under the CDM, which historically has been sold on carbon markets at an average price of â‚¬12 — 70 times the actual cost of destroying HFC-23.

Because of these vast profits, China has repeatedly rejected attempts to help developing countries destroy HFC-23 emissions through the Montreal Protocol. At the 2009 and 2010 Meetings of the Parties to the Montreal Protocol, China blocked progress of a North American proposal to pay the actual costs of destroying HFC-23 emissions at plants not currently covered by the CDM, which account for over half of developing country HFC-23 production. 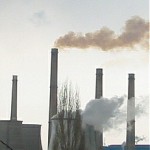 HFC-23 is produced as an unintentional by-product of the refrigerant gas HCFC-22, itself a powerful greenhouse gas and ozone depleting substance. This means that the quantity of HFC-23 produced is directly related to the production of HCFC-22. HFC-23 is an important contributor to climate change because of its incredibly high 100-year global warming potential (GWP) of 14,800.

“Attempting to force countries into squandering billions on fake offsets that actually increase production of greenhouse gases is extortion,” said Samuel LaBudde, Senior Atmospheric Campaigner with the Environmental Investigation Agency (EIA). “China is not the victim here, and a world order responsive to climate change cannot be predicated on unrepentant greed.”

With a 65 per cent tax on CDM projects, the Chinese Government has already received $1.3 billion — enough to destroy all the HFC-23 it produces for decades to come. Despite this, China still vents at least as much HFC-23 as it destroys, since about half of its HCFC-22 production is ineligible for CDM funding. Xei Fei’s statement makes it clear that preventing emissions is not nearly as important for China as continuing the enormous CDM revenues that benefit its government and industry alike.

“Carbon offsets derived from HFC-23 crediting only serve to subsidise the production of greenhouse gases and have no place in the future of carbon markets,” said Mark Roberts, International Policy Advisor for EIA. “If China is genuinely concerned about climate change rather than profiting from a fatally flawed CDM system, it will stop blocking efforts to control HFC-23 emissions and support a way forward that does not involve holding global climate as a hostage to its unrealistic demands.”

In the week before the Durban climate talks, the Montreal Protocol will again consider the proposal to control non-CDM HFC-23 emissions. Similarly, the CDM Executive Board will also convene to discuss revisions to the HFC-23 methodology, based on recommendations from its Methodologies Panel that recognise at least two-thirds of the HFC-23 credits issued to be fraudulent. To date, China has blocked moves in both forums. The CDM Executive Board must also decide whether to renew existing contracts for HFC-23 destruction and allow crediting for facilities not covered by the CDM, considerations that are strongly opposed by the international NGO community.

“The minimal cost of capture and destruction of HFC-23 should be borne by the HCFC-22 producers as the price of responsible business practice,” said Clare Perry, Senior Campaigner at EIA. “HFC-23 CDM projects have cost European taxpayers untold millions, allowed European industries to increase their emissions whilst subsidising chemical producers in China to produce yet more greenhouse gases. These dirty credits should be discontinued immediately.”

More information and EIA reports on HFC-23, the CDM, Montreal Protocol and related issues can be found at http://www.eia-international.org/our-work/global-climate.