Precious Siamese rosewood has been illegally logged to the brink of extinction in the Mekong region to feed a voracious demand for luxury furniture in China which leaves a bloody trail of death, violence and corruption in its wake.

Released today in Bangkok, Thailand, the new Environmental Investigation Agency (EIA) report Routes of Extinction: The corruption and violence destroying Siamese rosewood in the Mekong exposes a multi-billion dollar industry fuelled by high level corruption and recklessly destroying the increasingly scarce species on which it thrives.

The illegal trade in Siamese rosewood is driven by the expanding wealthy elites in China and their desire for the high-end Ming and Qing dynasty reproduction furniture, collectively known as hongmu.

Chinese Government support for the industry, coupled with a growing trend for investing in hongmu, has seen demand for raw materials far outstrip domestic supply and has left the country heavily dependent on imports; between 2000-13, China imported a total of 3.5 million cubic metres of hongmu timber, almost half of it (US$2.4 billion worth) from the Mekong region – including Vietnam, Cambodia, Laos, Thailand and Myanmar/Burma.

As a result, Siamese rosewood has become so scarce and valuable that logging it is now more akin to wildlife poaching; the tools of the trade are chainsaws, guns and even rocket-propelled grenades, armed violence is commonplace, and methamphetamines, aka yaba, are regularly used as both a stimulant and payment for loggers from border communities blighted by drug addiction. 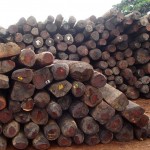 "As outlined in the report, the consequences for Thailand – both environmental and social – are very serious. Unless swift and decisive action is taken to stem this bloody trade, we could well be looking at the extinction of Siamese rosewood in a matter of a very few years."

With Siamese rosewood becoming increasingly rare, illegal traders are increasingly targeting other species approved as acceptable replacements by the hongmu industry – of 33 approved species, 21 are found in Asia.

The worsening crisis was recognised in March 2013 when Thailand and Vietnam successfully proposed to the Convention on International Trade in Endangered Species (CITES) listing Siamese rosewood on Appendix II in an attempt to protect this vanishing species.

Routes of Extinction details EIA's investigations into the Siamese rosewood trade during the past decade, including in the year since the CITES listing, and reveals how crime, corruption and ill-considered government policies from Thailand to China, via Laos and Vietnam, will likely result in the demise of Siamese rosewood, commercially if not biologically, in the near future.

Doherty added: "China has made some attempts to counter the appalling excesses of the illegal trade in Siamese rosewood, but they are clearly nowhere near enough."

Should we carry out mental health screening on schoolchildren?