The Governor of the Banque de France, Christian Noyer who is also a European Central Bank policymaker, said that given its economic position the UK should lose its AAA status before France does.

Speaking to the newspaper ‘Le Telegramme de Brest’*, M. Noyer was answering questions on the outcome of last week’s negotiations between the EU states.

He said that the agreement they reached was a good one that protected the euro in that it bolstered the rules of governorship.

He also said that France needed to be rigorous in its management of the public finances as the country had lived outside its means for too many years. With that confidence and growth would then return.

On the downgrade of three of France’s banks M. Noyer said that these banks were not undercapitalised and that he had no concern about their futures. Asked about possible restrictions on the availability of credit from them M. Noyer said that the French banks remain very active in lending so people should not worry about access to lending.

On the subject of credit rating agencies however he was most scathing. He said that their actions in threatening France and the other Eurozone nations with a rating downgrade were incomprehensible and irrational. And went on to say that the decisions the rating agencies come to seem to be based more on politics than economics.

Comparing the state of France’s economy to that of the UK he said that the UK should be downgraded before France was.

The problem here though is that M. Noyer is looking at France in isolation. Unlike the UK, France is well and truly shackled to a debt mountain over which it, as a now semi-sovereign nation, has little control. Although he would like France to be considered as a stand-alone nation state, the markets (and rating agencies) are coming to see the members of the Eurozone as so intertwined that they should be treated as one. 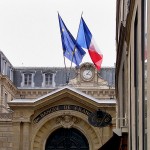 As they use the Eurozone and now EU mechanisms to keep countries that are effectively bankrupt afloat (falsely boosting their ratings) it is inevitable that the risk factor would be transferred somewhere else, which in this case is further up the credit rating chain chain.

The Eurozone politicians are trying to make the risk disappear, just like those companies that packaged up mortgage backed securities did just before the credit crunch and look where that got us.

It is therefore no wonder that the ratings and bond yields of countries such as Italy and France and ultimately Germany come under such market pressures.

Help to Buy is two schemes called one name