Christians have begun fleeing the Holy Land and the West Bank and it should serve as a wake-up call to Christians around the world and Europe in particular.

The emigration of hundreds of West Bank and Israeli Christian residents leaving for the United States, Canada, Europe and Central America where they have family connections comes in the wake of severe economic hardship as well as violence.

There is a growing exodus of Christians who are choosing to abandon their ancestral home in the face of Israeli attacks, grinding poverty and the prejudice of their Muslim neighbours.

Always a minority within Palestine, they are now a minority within their Christian heartland. At the present rate, the 2,000-year-old Christian presence would soon disappear. But, recent violence has provided an added incentive to emigrate. Because of economic, political and social difficulties imposed on the Christians and the Israeli military occupation the Christian community is dwindling from 10% in the twenties of the last century to less than 2% today. Overall about 160,000 Christians live in the Holy Land, including 110,000 in Israel the rest in the West Bank, Gaza and East Jerusalem.

Jerusalem today suffers division and inequality as well as oppressive measures that leave the Christian population under the mercy of an occupation that does not recognise the Christian community as an equal in the image of God.

The Israeli permit system is counter to basic rights of religious worship and freedom of movement and is counter to all basic human rights, contradicts international conventions and threatens to extinguish the very Christian traditions the Christians have been guardians of for centuries in the Holy Land.

There is the fear of conversion to Islam. Lately two members of the Christian community converted to Islam. With the latest conversions, only ten Christians are known to have turned to Islam in the past eight years. The conversions highlight the growing sense of vulnerability among the Christians in Gaza. Christians in Gaza, whom I interviewed by phone, say that Muslims are doubling their effort to convert Christians emboldened by the atmosphere of Islamic fervour fostered by Hamas. The informal pressure on Christians can range from stranger on the street urging them to embrace Islam to colleagues at work or university persistently discussing their Muslim faith with Christian colleagues. Especially vulnerable to the advances are youth wanting to join Gaza's wider society and gain greater opportunities for marriage and jobs. About 3,000 Christians live among Gaza's 1.7 million Muslim residents and their numbers have rapidly shrunk in the last years because of the turmoil in Gaza.

Some have emigrated and those who stayed behind said they feel increasingly unwelcome amid the more assertive religiosity everywhere in Gaza. The small size of the Christian community in Gaza makes it difficult to maintain independent institutions that preserve their identity. The community offers private schools for younger children, but most Christian youth attend public high schools and later enter into the Islamic University, and parents worry about their influence rubbing off onto their children.

Palestinian Christians have a long list of worries that include harassment by Muslims extremists and calculated lack of police protection by the Israelis. In recent years, several Christian institutions were attacked by Muslim hardliners. Both Israelis as well as Palestinians used the Church for their purposes. Both sides violated their commitments to the Vatican.

Christians of the Holy Land endured for 2,000 years through the rise and fall of empires. They have preserved the holy places of Christianity for generations of pilgrims who have come to worship there and for waves of hermits, monks, nuns and scholars who have come to dwell among them.

In their variety, they reveal the rich heritage of Oriental Christianity and as Arabs they enjoy a special charisma for relating Christianity to the Islamic world.

We ought not to forget that Israel and the Israeli-Palestinian conflict came into being with enormous political and financial support from the United States and Europe. Time has come that European Catholics should use their political and economic leverage and demand that that Christians in the Holy Land be able to enjoy freely their civil and human rights under Israeli and international law.

The most important thing now is that Europe and the international community should insist on free access of humanitarian organisations. Should these communities continue to suffer to the point that the living Christian heritage is at risk of disappearing from the Holy Land, much of the burden for that outcome will belong to the Europeans. 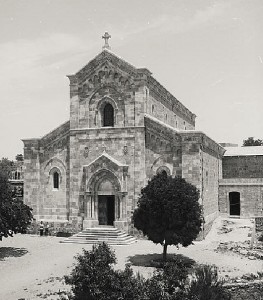 Inclusive capitalism: creating a sense of the systemic – Speech by Mark Carney