The Turin shroud has been displayed from the tenth of April in its resting place in the capital of Piedmont, Turin, Italy.

The cloth is said to be the material in which Jesus Christ the Christian messiah who is said to of saved all mankind from sin, was at one point buried in. The artefact has gone on display inside a bulletproof and climate controlled see-through casing for public viewing in Turin. Each tourist and follower of the faith is given a mere 3-5 minutes to view the relic due to numbers expected to be in excess of 2million arriving to view the item. 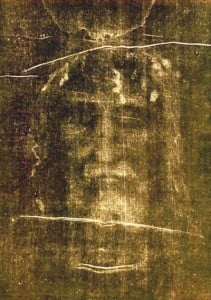 The 14ft long cloth plays host to an imprint of a bearded man believed to be that of Jesus, the Christian son of god. There have been many a books and documentaries dedicated to deciphering the age and origin of the relic. Most of which involve scientific studies that suggest the item in fact dates between 1260 and 1390. This was discovered by scientists via carbon dating which measures the age of the molecules that combine to form the relic.

However, this does not stop he growth of hope and strengthening of faith within Christians the world over upon seeing the artefact. Many a tourist and pilgrim will flock like sheep to the Shepherd to see the 4.3 by 1 metre piece of cloth said to have contained the son of the Christian deity.

Due to the pure age of the shroud it is only meant to be viewed every quarter of a century. Although it was last made available for public viewing on Christ’s birthday, which was the coming of the millennium in 2000. Prior to this it was also seen by the public in 1998. This was due to a request made by the religious leader Polish Pope John Paul II. He had given consent to scientists to study the ancient item in hopes of revealing its true age. Pope John Paul II asked that scientists use “scientific methodology” to determine how old the artefact was. He also requested that they respect the “sensibility of faith” of the followers of the religion whilst doing so.

For this act I hold a lot of respect for the John Paul II. Although being of an atheist mind myself, I feel that it takes a great man to question such an important artefact associated with his own faith in hopes of knowing the truth. I believe that his faith must have been astoundingly strong for him to be able to consider this course of action. The question here is not whether the relic is authentic but whether it unearths and restores faith within those who believe in Christianity. Even if it is merely a reproduction that dates back to the medieval times, it is also a visual aid to remind followers that the item at one point did exist. Why dash the hopes of those who travel so far to see the shroud, they are doing nothing wrong.

A professor of Christian history has called the relic a “representation” of the original burial cloth of Christ. Antonio Lambatti, expressed his view upon the items authenticity; “in my judgement it’s a fake”.

So it may not be the original cloth used to protect Christ following his death. Although the overwhelming feeling of joy and other emotions experienced by the Christian viewers today is by no means fake.

During WWII the power Hungry beliefs of the Nazi party led by Hitler gave the church cause to move the relic from Turin Cathedral to the Apennine Mountains. It was to be kept in a monastery in Montevergine in hopes of stopping the religious symbol becoming a trophy in the hands of Dictator Adolf Hitler. There was a presence of anxiety surrounding the cloth as if it were to fall into Hitler’s or the Nazi party’s possession it may be used to cast a religious hold upon those following the faith. The reverend Andrea Davide Cardin, who holds the position of director at the state library in Montevergine, tells how the Turin shroud was kept safe encased with a wooden altar inside a chapel within the abbey.

The cathedral was to be glad of the shrouds safe return in 1946. It seems it was the correct decision to hide the Christian artefact in Montevergine, as other monasteries suffered large amounts of damage during bombings by the allies during the war. The cloth also survived a fire at the cathedral in the 17th centenary and a blaze some 100 years before.

The current Pope, Benedict XVI, will travel to pray before the Christian artefact on the May 2nd where it is being shown in Turin.

So it is not for us to question the authenticity of the religious relic, instead we should acknowledge the sense of fulfilment and justification of beliefs it has the ability to materialise within the hearts and minds of all those believers who see the shroud. There is no doubt that it creates a positive effect upon those of the Christian faith. In a world so full of negativity, why should we pit science against religion to determine the truth behind the Shroud? When in fact the artefact associated with the Christian faith is inflicting harm upon no one?