A Christmas gift of £500,000 from philanthropist and businessman Sir Michael Hintze to the Royal Navy and Royal Marines Charity (RNRMC) is to be used to help spread some Christmas cheer amongst the families of HMS Illustrious, which has been assisting the typhoon Haiyan disaster efforts in the Philippines.

The Hintze Family Charitable Foundation will gift the donation over 20 years but it was decided by the charity that part of the first payment should be shared with HMS Illustrious as its crew will not be home in time for Christmas.

The RNRMC (www.rnrmc.org.uk) has provided funding for the families of HMS Illustrious personnel to attend especially arranged Christmas parties and local pantomime performances. Over 250 children and spouses will attend festivities in Portsmouth, Somerset and Cornwall.

The foundation is encouraging others to forge longer-term financial relationships with the RNRMC. 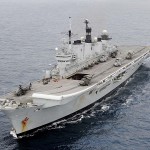 “The Foundation is delighted to offer its long-term commitment to the RNRMC. The work it has done for the naval charity sector is outstanding and, indeed, their support for serving personnel and their families and veterans is first-class. It is a privilege to support those who give so much to our nation and I see this as the beginning of a more substantial commitment to the RNRMC.”

The gift from the Foundation is made, not only in recognition of the nation’s sailors and commandos but also of the RNRMC’s success in amalgamating over 70 funds and charities. The RNRMC operates a group structure, creating operating efficiencies and enhancing grant-making and fundraising capacity in the sector.

In appreciation of the Foundation’s gift, the RNRMC invited Sir Michael to become its first Vice Patron.

“Sir Michael’s unwavering commitment is reflected in his appointment as Vice Patron and his presence brings a sense of momentum to the Charity. We very much look forward to the insight, expertise and ambition that Sir Michael offers, which will truly set the pace for our future fundraising endeavours. Today marks a step change in the RNRMC’s philanthropic approach and I very much hope that this will encourage others to join us in supporting the Charity.”

“I feel exceptionally privileged to accept the role of Vice Patron and I do so with the greatest pleasure. I have enjoyed my engagement with the Royal Navy and Royal Marines Charity a great deal and I look forward to building on this in the future. There is much more to do.”