Atheists and Secularists are not the only ones who miss the brilliant, eloquent and acerbicÂ tongueÂ of Christopher Hitchens in the God debate.

A few days ago I wrote on the potential damaging effects that Secularists and Atheists such as Richard Dawkins are having on society from my own perspective as a Christian and it saddens me to watch old You Tube clips of Hitch who actually did more for Christianity than many church leaders have in recent times.

ChristopherÂ asked awkward questions, which would challenge faith and demand explanation and justification of faith and gave Christianity of the late 20th and early 21stÂ centuryÂ something to kick back against in relation to the modern world and the encroaching influence ofÂ secularistÂ ideology on our everyday lives.

Only in responding to theÂ intellectualÂ challengesÂ and theological damning from a brilliant mind like that of the lateÂ ChristopherÂ Hitchens could believers in Christ find a true test in the public arena through the identification and proper vocalisation of atheistic beliefs.

Who is left to carry the mantle? The quiet reductionism of Richard Dawkins does not translate outside into debate where Dawkins is frequently found wanting and not for lack of argument but through his oratory skills which pale in comparison to that of Hitch.

Dawkins has admitted that he cannotÂ rule outÂ intelligentÂ design and that the science does not currently give an explanation as to how the universe was made.

In the Post-Christopher Hitchens world we live in (which could beÂ commemoratedÂ as P.C. although I suspect he would baulk at such a notion, especially seeing as there would be the ensuing Political Correctness parallels drawn), Â representation for atheists is essential in getting the message across, however the cult of personality even applies to the most narrow minded of rationalists.

I find it quite ironic that a group of people who dismiss theÂ existenceÂ and morality of an iconic, authoritarian deity having rule over them yet choose iconic authoritative individuals to represent them inÂ theÂ public arena.

If Christians want to test their faith then I suggest they have a little look at whatÂ ChristopherÂ Hitchens had to sayÂ about God, then try and oppose it.

The trouble is Christopher Hitchens is no longer there to answer back so play the ball and not the player, especially when the main striker has left the pitch.

OK I am about to go off on a tangent. 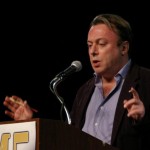 I have been asked whatÂ relevance does Christianity have to play in the world of economic and political debate and this is a question I would very much like to answer.

This applies to atheists/secular thinking Â just as much as it does to persons of any other faith and is not exclusive to faiths where there is aÂ controllingÂ external deity, faith in a vagueÂ holisticÂ version of reality like the one that Dawkins subscribes to wouldÂ suffice.

There is anÂ uncomfortableÂ questionÂ we must ask ourselves and that is what forms the basis of ourÂ morality? And are we convinced that western morality is NOT theÂ by-product of inherited values from 1500 years of Christian influence upon our thinking?

Many would argue that Christian morals were formed in order to impose a structure for cohesive existenceÂ withinÂ small tribal communities and not from an external deity so therefore all moral values, even those inherited from Christianity, are actually part of an evolution process because there is no God.

Such aÂ hypothesis has the audacity to lead us to believe that we are the highest expression of morality and that God does not exist because we humans think such a deity would be morallyÂ inferiorÂ to ourselves.

SoÂ the ideological differences between political parties and the opposing economic structural mechanisms are all subject to our collective morality which we need to identify the root of this morality.