City level house price inflation currently running at 9.4% – with an average price of £229,300

The large regional cities outside southern England are recording an acceleration in growth off a low base. Glasgow (up 8.3%), Manchester (up 7%) and Liverpool (up 5.1%) are registering the highest rates of annual house price growth since 2007.

− Glasgow house prices currently average £110,000, less than half the £229,300 average price across all the 20 cities measured by the Hometrack UK Cities index.  House prices in Glasgow stopped falling three years ago and have since risen by 13%. In the last 12 months they are up by 8.3%, the highest rate of growth since August 2007.

− Liverpool has registered the weakest house price performance of all the British cities covered by the index. House prices declined between 2007 and early 2013 and have since increased by 10.5%. In the last 12 months the rate of growth has risen to 5.1%, the highest since August 2007. Despite this modest recovery, the average price of £109,800 is still 13% lower than the 2007 peak.

The recovery emerging in large regional cities contrasts strongly with the rise of London’s house prices where average values are up by 70% since 2009 (and by over 100% in the highest value markets in central London). It is these high value markets that are now recording some of the weakest levels of house price growth (Kensington and Chelsea -2.6%, City of Westminster +1.3%) as tax and currency changes impact demand after a period of stellar price appreciation.

“Improving consumer confidence and low mortgage rates are boosting demand in cities where the recovery in house prices is in its infancy. While southern cities have been in recovery mode for over 6 years with price gains of up to 70%, the large regional cities have seen far more modest price rises over just the last 3 years.

“Further house price growth is likely to improve market confidence as it pushes down loan to values on mortgaged homes and creates capacity for households to access cheaper credit.  Many corporate investors and developers are looking to the major regional cities in search of better value for money in new investments relative to London.

“The outlook for the next 12 to 18 months will be a balance between how much the high growth cities slow on affordability pressures and how much more momentum will come from cities where the pick-up in house prices is just beginning to pick up.” 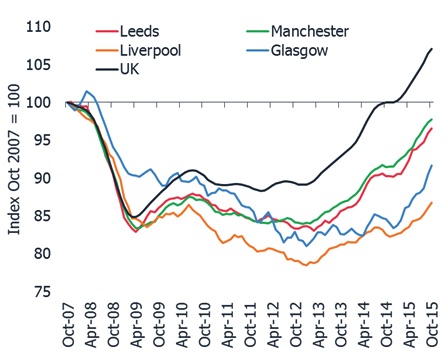 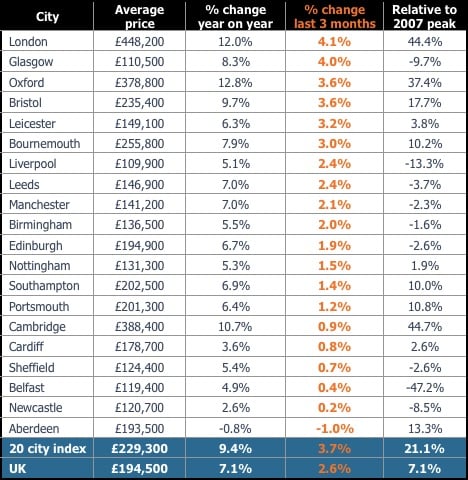