House prices are up by 4.3% over the last three months outstripping the 2.4% annual growth in average earnings … and there is room for further growth as nine of the twenty cities still have average prices that are lower than their 2007 peak

• All cities except Aberdeen are registering house price growth that outperforms the annual increase in average earnings (currently 2.4%)

Annual house price inflation across the Hometrack UK Cities House Price Index is accelerating as demand for housing continues to outstrip supply. The latest index shows that city level house price inflation running at 8.5% in July compared to 7.2% in April. House prices are up by 4.3% in the last three months – the highest quarterly growth for 11 years. This upward momentum in house prices comes on the back of a 32% increase in transaction volumes since April 2015 – mortgage lending for home purchase has grown 26% over the same period. 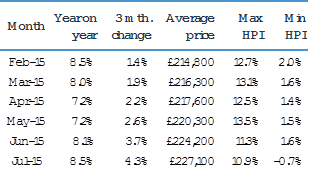 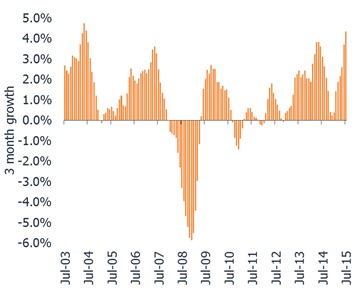 All cities with the exception of Aberdeen are registering house price growth ahead of annual growth in average earnings (currently 2.4%). The highest year on year growth is 10.9% in Cambridge followed by Oxford, London and Bristol. The lowest growth rate is being registered in Aberdeen (-0.7%).

There is room for further catch-up in city level house prices. Nine of the twenty cities still have average prices that are lower than 2007 levels although this gap is narrowing rapidly.

"There remains further upside for city level house prices over the remainder of 2015.  Low mortgage rates, economic growth and rising earnings will continue to stimulate demand and put an upward pressure on prices. As an international city, London is out on its own setting new highs for prices and affordability. How long this can be sustained is down to the prospects for the different segments of demand, specifically international buyers, domestic investors and domestic home owners.  Overall city level house price inflation remains on track for 10% growth in 2015."