City level house prices up by 6.4% in first half of the year and on track to break 10% by year end

− Northern powerhouse cities like Leeds, Manchester, Liverpool and Sheffield have all registered a pick-up in growth since 2013, but average prices are still below 2007 level

− The timing of a rate rise in uncertain, but any upward shift in interest rates would impact market sentiment and reduce the rate of house price growth

House price inflation across the UK’s 20 largest cities was 6.4% in the first half of 2015 according to the Hometrack UK Cities House Price Index.  Glasgow recorded the third fastest growth in 2015 H1 after Oxford and London as the housing recovery spreads. Aberdeen was the weakest performer with house prices flat in the first half of the year. 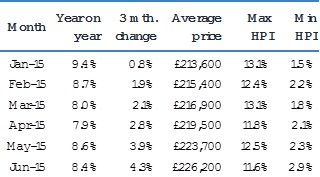 The year on year rate of growth across all 20 cities covered by the index is 8.4% with an average price of £226,200. At a city level this ranges from 11.6% in Cambridge to 2.9% in Liverpool. Oxford and Cambridge continue to perform like extensions of the London market with all cities having a very similar profile of house price growth over the last 8 years.

Looking to the second half of the year, the headline rate of growth across the 20 cities index looks set to move higher as continued growth in house prices pushes the year on year rate towards 10% as the recovery spreads and households continue to price low mortgage rates into house prices.

The greatest risk on the horizon is an increase in interest rates, recently highlighted by the Bank of England Governor. 57% of outstanding mortgage debt is on variable rates, which is lower than the 73% high registered in mid-2012.  While a year’s worth of new buyers have been subject to tougher affordability tests, the majority of mortgagees have not.  Many homeowners have continued to pay off debt while rates have been low, so any increase in mortgage rates is likely to impact market sentiment which, given the shortage of supply, would result in a marked slowdown in the rate of house price growth.

“The greatest risk facing the housing market is an upward movement in interest rates which would check market sentiment, cool demand and result in a marked slowdown in house price growth.”

Oxford and Cambridge extensions of London 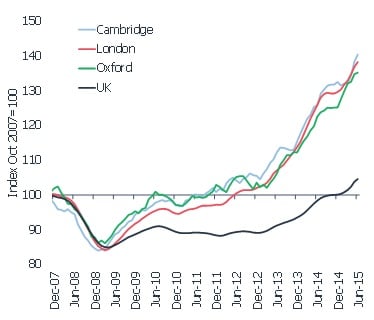 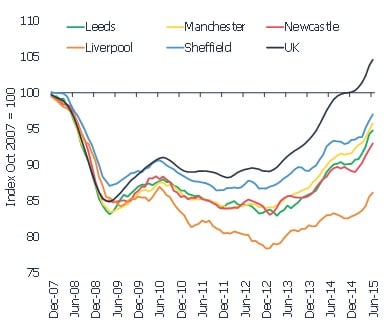 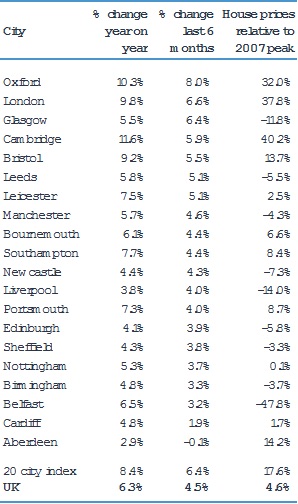 NOTE – The definition of London ‘City’ is larger than the London Government Region. The ‘City definition extends further out into London’s travel to work area capturing the commuter areas outside the 33 London Boroughs. The London ‘City’ area covers 44 local authorities and better represents the housing markets that are influenced by the London economy.

Russian Consumer Confidence Indicator up due to Sochi Olympics