Clamp down on tax avoidance to fight poverty says ActionAid

Clamping down on tax avoidance will be fundamental to fighting world poverty in the 21st century, ActionAid tells the United Nations.

Stamping out tax avoidance and unfair tax deals in the world’s poorest countries must be a key part of the plans to fight poverty after the Millennium Development Goals expire in 2015, ActionAid will tell the United Nations.

ActionAid has calculated that an estimated $300 billion is lost every year by developing countries through a combination of corporate tax avoidance and tax deals. That is equivalent to twice the amount spent on aid last year.

The money lost could instead help fund vitally needed education, health and sanitation programmes in some of the world’s poorest countries, a new ActionAid briefing paper – Post 2015: Business as Usual or Bending the Arc of History – has argued.

The paper is being launched today in New York in advance of the meeting of the United Nations General Assembly.

“At present the tax system is failing many developing countries. They are suffering because of bad international tax treaties and rampant tax avoidance and they face huge pressure from large corporations to give unnecessary tax breaks.

“Reforming the global tax system is one of the most powerful potential weapons in the international arsenal. The OECD have acted, the G8 have acted and the G20 have acted. Now it is time for the UN to do the same,” said ActionAid International Advocacy Co-ordinator Sameer Dossani. 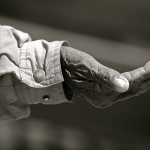 The Hand by Alex proimos via Wikimedia Commons

In a report earlier this year, ActionAid revealed that a UK-based company’s tax avoidance and tax breaks cost Zambia an estimated $27 million which is enough money to put 48,000 children in school.

ActionAid is arguing that cracking down on tax dodging and unfair tax deals must be part of a much more ambitious United Nations agenda for tackling inequality and poverty after 2015, and one that goes beyond the $1.25 extreme poverty line currently on the table.

“The United Nations now needs to be more ambitious. It needs to raise its game and raise its extreme poverty benchmark. And it needs to make tax justice a key part of its future work. Aid remains vital. But simultaneously clamping down on tax avoidance has the potential to lift millions of people out of poverty,” said Mr Dossani.