Class system in the UK has a facelift

Isn’t it marvellous than in the age of ‘we’re all in this together’ someone is still trying to pigeonhole us all. And to my mind missing the point altogether as I’ll explain below.

According to new research the traditional class system of upper, middle and working was too simplistic. So a new system has been devised on the basis of income, savings, house value and social capital (a combination of how many people you know and what their status is).

Is this how we want to view society and our own place in it? All based on wealth and ‘status’?

But all these are based purely on what you’re worth and who you know.

This seems very shallow to me when considering the complexity of a society, so I had my own simplistic attempt at pigeonholing society.

There are in my mind only five classes:

The True Elite. These are people who are always hardworking but also give more to society than they are ‘worth’.

The Hardworking. These people work hard in a way that can be measured in positive, neutral and negative terms with regard to their contribution to society. If you are not hardworking then you are either just lucky, unlucky or a leech.

The Lucky. The people who are born into great love or wealth, or perhaps endowed with an above average mental ability or physical prowess.

The Unlucky. Those born into poverty or who maybe suffer from mental problems or a physical disability (this is not meant to offend, it is an attempt to acknowledge their existence).

The Leeches. These are the people that take out of society more than they are ‘worth’.

‘Worth’ being a value that they should be contributing towards a stable and properly functioning society. Those that could give a lot have a high ‘worth’. Whilst those that are say extremely ill and rely on the state to survive would have a sort of neutral ‘worth’ and would be classed as unlucky not as leeches. ‘Worth’ includes the material, the spiritual and one’s time.

In my little system everyone lives a neutral life in terms of contribution to society unless they are a true elite giver of a leech taker.

Now to put ‘leeches’ into context I am not talking about people on benefits or some other cheap shot like that. I am taking about people who could and should make a fuller contribution but decide that they would rather draw from society’s bank than remain neutral or give more. This could range from a poor thief to a wealthy tax dodger.

The true elite are always hard working. Those for example that are born rich, stay idle and give their money away over time are not true elite they are just plain lucky. If you are not one of the true elite or not a leech then you live a neutral life in terms of society, which in itself is not a bad thing.

As you can see from the diagram there are all sorts of permutations but one thing is for sure – the true elite and the leeches are mutually exclusive. 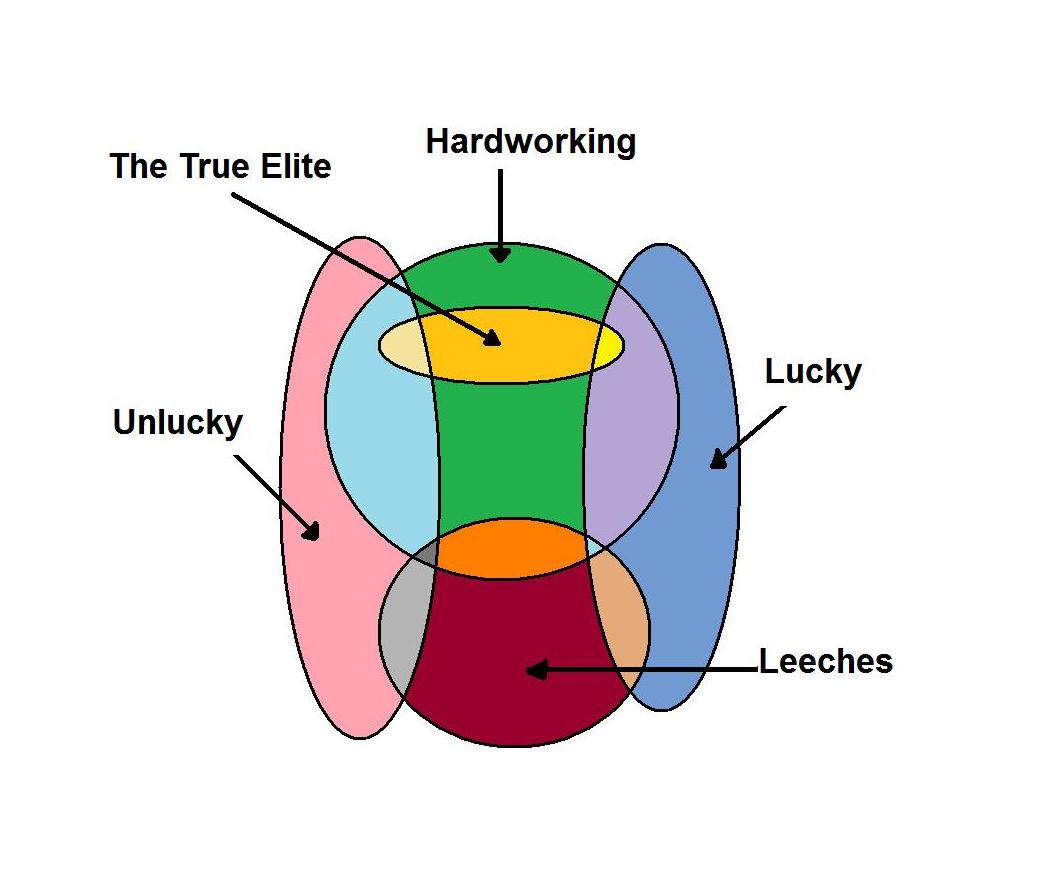 Someone can be unlucky and hardworking but still contribute more than they are ‘worth’ so becoming part of the true elite.

So both rich and poor alike can aspire to be viewed as part of the true elite. Now that’s what I call equality!

But the worst people may be those that are lucky but work hard at draining society for their own benefit.

And in a society where the worth sucked from society by leeches is more than that put back in by the true elite then a rocky ride must surely ensue for whichever of the other ‘classes’ you are in. In fact a society with no leeches would be paradise indeed and would not need a true elite (but would still benefit greatly from one).