As we approach the September FOMC meeting, there is increasing speculation of whether the Fed will pick this month to start slowing the pace of its QE purchases, or delay tapering.

Within this report Colin Cieszynski looks at:

• What potential change in tapering expectations could mean for trading

Ever since the Fed launched QE3 in late 2012, traders have been speculating how long it may last and how the Fed may go about removing this extraordinary monetary stimulus.

The two previous rounds of QE ended with the Fed cutting off asset purchases cold turkey. The problem with that was the easy money from QE has tended to follow the part of least resistance to Wall Street rather than Main Street first, inflating stocks and commodities. The abrupt removal delivered big shocks to stock markets which fell over 10% within three months of the end of the two previous programmes.

Having learned from the last two rounds, this time around, the Fed appears intent on removing the stimulus gradually to reduce the shock to the financial system. It also means, however, that a tapering related correction may not be as deep, but could drag on longer.

Unlike its predecessors, QE3 was designed from the start to be open-ended with the ability to increase or decrease purchases depending on how the economy responds to the stimulus. In particular, FOMC members have indicated that employment is a particularly key factor in driving their decision making.

Speculation as to when the Fed might start cutting back on QE purchases picked up in the spring when the unemployment rate reached 7.5%, bringing it within 1.0% of the 6.5% threshold that the FOMC previously indicated as a threshold where it would consider taking action.

Strong headline employment growth through the summer steadily ratcheted up speculation that the Fed would start tapering this month, but the recent nonfarm payrolls report threw a big monkey wrench into the works. The big downward revision of the July payrolls increase to 104K was particularly devastating to tapering speculation, giving FOMC members who wanted to see more data even more reason to hold off for now, particularly with US retail sales and Empire manufacturing data disappointing more recently.

Where do current FOMC members stand on tapering?

To get a better sense of when the Fed may start tapering, we reviewed recent public comments from FOMC members to get a sense of where each of them stands on the issue of tapering. 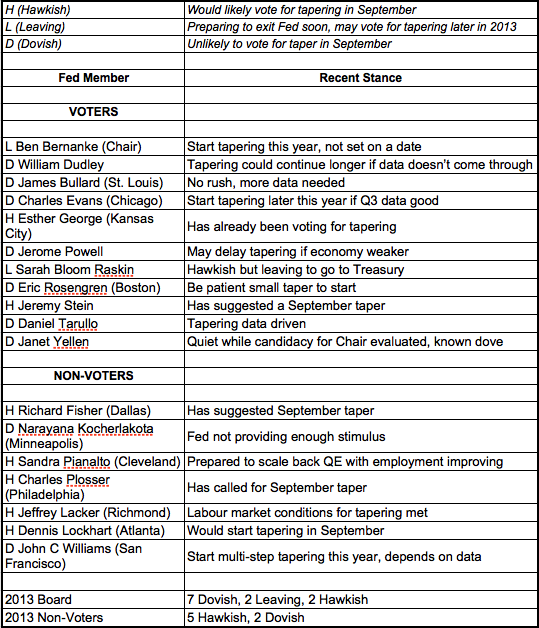 Between the normal rotation of voting members and the likely departure of two permanent voters, things could change dramatically next year. Dr. Bernanke and Ms. Raskin are likely to depart the Fed by early 2014.

Plus, the four voting seats for regional banks changes as follows:

Based on this rotation alone, we may see a more hawkish FOMC next year.

The weekend decision by Lawrence Summers to drop out of the race for Fed Chair, however, has changed as he was widely expected to join the hawkish camp

If the 2014 board was voting this month, the vote to taper could be a lot closer:

This suggests that while the FOMC may still decide to start tapering this year, it may not happen as soon as some had hoped. While tapering appears likely to start early in 2014 if it doesn't happen this year, the process of slowing asset purchases may now be slower and less aggressing than had previously been thought.

Another factor that could affect the timing of tapering is the pending change in leadership at the Fed. Chairman Bernanke's term ends in January 2014 and he is not expected to seek another. The new Chair's first meeting would be at the end of January, leaving three meetings under the current administration; mid-September, the end of October and mid-December.

As we saw during the change of administration at central banks in the UK, Japan and Canada earlier this year, there may come a point where it makes more sense to leave the big policy decisions to the incoming leadership.

The big question is whether the Chairman considers it a priority to start tapering before he leaves office or if he is prepared to leave that decision to his successor.

This pretty much rules out the December meeting for starting tapering, although October remains a possibility.

With US job growth slower than thought, a September start to tapering looks pretty unlikely at this point, although there remains a small chance of a token taper to get the ball rolling.

A move in December also appears unlikely, making the October meeting the last chance for tapering under Chairman Bernanke. If tapering doesn't arrive by Halloween, it likely won't happen this year. The next likely date for tapering would then be the late January meeting where the new Chair may be expected to put their own stamp on policy and set the tone for their tenure as Governor Kuroda did in Japan and Governor Carney did in the UK earlier this year.

The most likely scenario at this point appears to be that the Fed may indicate in its comments this month that it is considering moving toward tapering, start off with a small cutback in October and then get more aggressive on tapering in the New Year when the new leadership takes charge.

What could changing tapering expectations mean for trading? 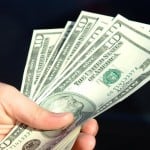 QE programs have tended to have two main effects on world markets. It's easier for hot new money coming into the financial system to find its way into stocks and commodities. It just takes longer for money to be put to work in the mainstream economy through loans and investment. Therefore developments that support continuing QE longer have tended to boost stocks while developments that support earlier or more aggressive tapering have knocked stocks down in recent weeks.

The second main effect has been in currency markets. Increasing the supply of money through QE undermines the value of a currency. As we have seen in the recent rally of GBP at the expense of USD and EUR, and the big USD rally last spring developments that suggest a central bank may move toward tapering tends to boost currencies while indications QE or other stimulus may be kept on longer tends to knock currencies down.

Although the recent Syrian crisis briefly restored gold and silver's status as haven plays, otherwise over the last few months they have mainly been trading off of inflation expectations. Increased monetary stimulus increases the risks of future inflation, boosting precious metals while the prospects of decreased stimulus or actual tightening reduces the risk of inflation getting away, undercutting support for gold and silver.