The housing and mortgage markets look set to continue to show greater levels of activity in 2014, according to the latest forecasts from the Council of Mortgage Lenders.

However, the CML sees an unbridled housing boom as unlikely. Indeed, given the already stretched nature of household finances, the new regulatory environment and the likely future course of interest rates, housing market activity may well ease back of its own accord.

In terms of specific features currently influencing the mortgage market, the CML suggests that the volumes of business written under the new Help to Buy mortgage guarantee scheme may be relatively modest, "such that it has a smaller but more positive market impact than many commentators suggest". (A box section in the full forecast article gives further explanation of this view).

The CML's forecasting horizon covers a period when the Bank of England may consider increasing interest rates. While this is likely to have a greater impact from 2016, the benign period of falling arrears and possessions may be coming to an end – although most households will cope with the transition to more normal interest rates.

"Gross mortgage lending climbs above £190 billion next year, its highest level since 2008. While this is largely on the back of the continuing revival in housing market activity, we also expect to see a meaningful turn-round in remortgage activity.

"Despite a strong pick-up in gross mortgage lending, we have pencilled in relatively modest net lending figures – £15 billion in 2014 and £20 billion in 2015. While this would mark a climb out of the sub-£10 billion doldrums, where the market has languished since the credit crunch, it does nevertheless represent a rather muted position. This reflects, among other things, our view that some households will use the relatively benign economic conditions to prioritise debt repayments, ahead of medium-term interest rate rises.

"We think there are good grounds to be optimistic that the vast majority of households will cope with a slow but certain transition to more normal interest rates. This seems to be the game-plan which the Bank of England has in mind, but presumes (as we do) that the UK avoids a destabilising housing boom over the next few years." 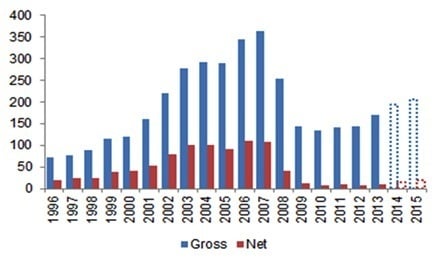 Accelerate and Pitch your entrepreneurial idea through the Reload Greece Challenge

What Should You Do if You're Injured at Work