The Co-operative Bank has announced today the start of a new social investment scheme that could herald the launch of a completely new asset class.

The aim of this new initiative, called the Global Development Co-operative, which has been developed with the International Co-operative Alliance, is to raise $50 million to get low cost finance (at 2%-5% p.a. over terms up to seven years) into the hands of third world co-operative businesses for both capital and infrastructure projects.

The fund has backing in the US, China, UK, India and France and now wants to attract more support from global investors and foundations. Its creation also coincides with the UN’s recent declaration that 2012 will be the International Year of Co-operatives.

Co-operatives have a very large potential. For example the top 300 co-operatives turnover more than $1.6 trillion and employ over 100 million people. They also support local initiatives, create jobs and reduce poverty. 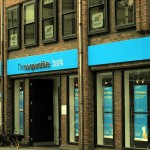 But co-operatives have traditionally had difficulty in raising money due to finance institutions being inactive in that area as well as the businesses themselves having little in the way of collateral to offer up.

So this new investment scheme could pave the way for more money finding its way into the hands of co-operatives.

We believe this new concept will be of interest to investors looking to support social or impact investments.

Co-operative businesses are vital to sustaining communities across the third world and this fund would help these types of businesses to grow, create more jobs and help tackle issues like education and sanitation.

It is also an opportunity for investors to get involved at an early stage in a new type of initiative that we hope could lead to a new type of asset class being developed.

By Kaihsu Tai (Own work) [CC-BY-SA-3.0 (www.creativecommons.org/licenses/by-sa/3.0) or GFDL (www.gnu.org/copyleft/fdl.html)], via Wikimedia Commons

If the Economy Is Improving, Why Is This Happening?