Today, new research from used car website, Motors.co.uk, has revealed just how expensive the modern drive time commute has become, with 67% of adults stating they would be happy to take a pay-cut and work locally to reduce the cost of their commute.

The research, which polled over 2,000 adults in Great Britain, has found that just over one in five Brits (22%) would be willing to commute for an hour or more to receive higher salaries. The findings could demonstrate that the majority of people living in Britain are dissatisfied with paying the extortionate sums of money used to travel in to work each year.

With British motorists now traveling an average of 16.7 miles a day to get to work and a standard, low economical car expected to cost up to 50p per mile in fuel, Britain’s drivers are predicted to pay as much as £3,048 a year on commuting costs.

Now with new rail routes such as HS2 and Cross rail expected to raise house prices in relevant areas up by 40%, and stamp duty only cut until 2015, British motorists could be worried about the lack of long term benefits announced by the Government, as nearly eight in 10 (77%) adults have claimed they would be reluctant to buy a property in a commuter town if it didn’t come with any access to at least one parking space. With this in mind, it is likely that new fast rail link locations across the UK will struggle to attract migrating workforces who cannot afford to live in more affluent areas. 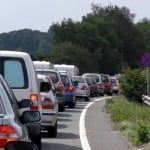 “The Government managed to appease many British motorists during the last budget report, offering another temporary freeze in fuel tax, promises to repair roads and a reduction in fuel costs. However, whilst these policies provide some momentary comfort, several issues still need to be addressed.

“The people of Britain have clearly reached the edge of their frustration with the amount of money they sacrifice each year on commuting costs, not to mention the worrying lack of parking available to them in commuting towns. With countless numbers willing to take pay cuts to avoid the cost and stress of travelling long distances to work, there is a growing concern that essential workforces are being driven away from areas that desperately need them.

“The Motors.co.uk research shows that the British public is fed up with having to waste their hard earned cash on things like commuting costs and parking fines when in reality, they urgently need it to heat their homes, feed their families and enjoy a decent quality of life. It’s encouraging to see the Government taking some steps to improve motoring conditions in the UK, but they still have some way to go in understanding the real day-to-day problems the people of Britain face.”