A recent investigation has revealed that nearly a third (32%) of us do not trust price comparison websites to get us the best deal.

The Which? investigation illustrated why customer satisfaction in comparison sites was lower than for other finance sectors when it put the same high risk car insurance scenario to different sites and got massively different quotes. These quotes differed by a margin of over Â£1,500.

Which? asked 6,038 of its members to rate eleven of the biggest names in price comparison sites.Â MoneyExpert.comÂ and MoneyFacts.comÂ were ranked the highest but their customer satisfaction scores were just 46%. This is low when compared with many other areas of personal finance rated by Which?. For example, their top rated car insurance provider has a customer score of 82%.

MoneyExtra.comÂ was the lowest ranking comparison site with a customer score of 28%, receiving only two star ratings for all categories. Market leaderÂ MoneySupermarket.com, which had an annual turnover in 2012 of Â£204.8m, was ranked fourth in the Which? table.

The survey found that Which? members who use comparison sites visit an average of two sites before making a decision and one in eight (13%)Â feel the need to visit four or more sites to get the best price.

Which? also compared five like-for-like car insurance quotes on ten comparison websites and found that they rarely got the same results. In one high-risk scenario of insuring a 22-year-old driver living in a high-risk area, Which? found a difference of more than Â£1,500 when looking at the cheapest quotes on each site. GoCompare.com,Â TescoCompare.comÂ andÂ MoneySupermarket.comÂ had the cheapest price at Â£751.25, withÂ MoneyExpert.comÂ being the most expensive, quoting us Â£2,280.70. Even for one of the low-risk scenarios, the cheapest quotes varied by more than Â£150 between sites.

With the prices quoted varying so widely between the different comparison sites for the same scenario, it is always advisable to shop around as not all will cover the whole of the market.

For example, the research showedÂ MoneySupermarket.comÂ leads on coverage with 120 insurers out of an estimated 230 brands in the market, whereasÂ LoveMoney.comÂ andÂ MoneyExpert.comÂ cover more like 10% of the market by number of brands. This could help to explain whyÂ MoneyExpert.comÂ was unable to compete on price in the high-risk scenario.

Consumers need to be aware that the cheapest price is not the only thing to consider, as in the investigation Which? didn't want to pay a voluntary excess but found that some of the sites automatically preselect an excess. Six of the sites looked at did this during the quote process (Comparethemarket.com,Â Confused.com,Â GoCompare.com,Â TescoCompare.com,Â Moneyexpert.comÂ andÂ Uswitch.com), whileÂ MoneySupermarket.comÂ automatically gives you results with a preselected excess before you can change it. If you weren't paying close attention you could end up with a policy that didn't meet your needs.

"We've found that many people just don't trust comparison sites to get them the best deal and from the results of our research it looks like they are right to be sceptical.

"Price comparison sites claim to do all of the work for you but we found they don't always guarantee people the best deal, or even the right one.

"We want comparison sites to treat customers fairly by being upfront that they don't cover the whole market and more transparent about what is and isn't included in the policies they're selling."

The advice from Which? to people when using price comparison sites includes:

* Check more than one site, as they found you're likely to get a range of results. Remember that not all sites cover all insurers, and some companies won't be included as they choose not to be featured on comparison sites.

* Look out for preselected options and added extras, as the sites make assumptions and you may end up with quotes that don't reflect what you want.

* Consider value for money as well as price, as the cheapest deal may not provide you with the cover that you need.

* You don't have to buy through a price comparison site and could use the quotes provided to help negotiate a better deal with your current provider. 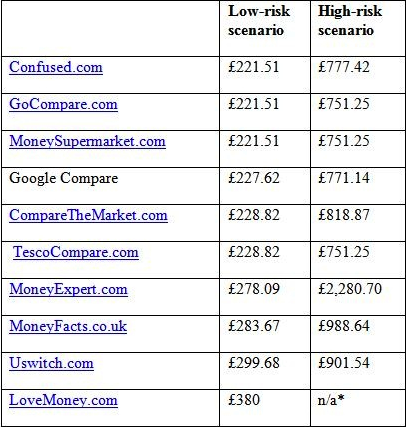 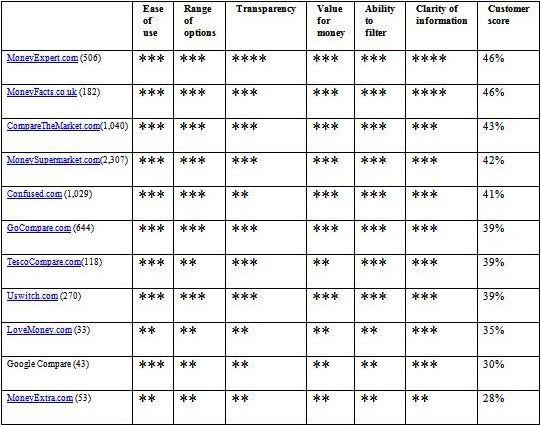 Which customer satisfaction with comparison sites

Politicians Mislead the Public on the Causes of High Living Costs