• Competition for jobs hits post-recession low – with just 0.85 jobseekers for every advertised vacancy in December, compared to 1.61 in December 2013

• Northern skills gap – promising salary increases in much of the North, but many Northern employers struggling to attract skilled candidates

Competition for jobs halved over 2014 to hit a new record low of 0.85 jobseekers for every advertised vacancy in December, according to the latest UK Job Market Report from Adzuna.co.uk.

The number of jobseekers going after each advertised role has nearly halved by comparison to December 2013, when there were 1.61 jobseekers per position.

Total advertised vacancies have risen by a third over the last year. There were 968,273 jobs advertised in December, 30.0% higher than 744,665 available positions in December 2013, as the number of available jobs continues to close in on the one million mark. On a monthly basis, there were 1.9% more vacancies compared to 949,788 in November, breaking through the previous post-recession high.

Wage growth maintains a strong lead on inflation, helped by Consumer Price Inflation of just 0.5% in the year to December 2014. The average advertised UK salary in December 2014 was 6.9% higher than 12 months prior, meaning the average salary packet has grown by £2,109 in real terms over this period.

But there are still warning signs on the horizon. At £34,548, the average advertised salary in December was actually £1 lower than November’s £34,549. This is the third consecutive monthly fall, possibly signalling salary stagnation.

Andrew Hunter, co-founder of Adzuna, comments: “The streets might be paved with jobs, but that doesn’t mean they’re paved with gold. On a month-on-month basis, salaries have been static for three months running. This is partly down to an increase in lower paid roles, but also due to growing concerns over an increasingly fragile Eurozone. The recent plateauing may signal a larger and more worrying trend towards stagnant wage growth.

“As long as the warm breeze of slow inflation keeps real wage growth aloft, we will keep feeling richer. But the wage recovery can’t glide forever – and we’re already losing height. In order to sustain the uplift the engines of the North must keep running at full throttle, operating on the jet-fuel of the UK’s booming manufacturing and construction industries. We cannot allow economic uncertainty to get in the way of our booming export sector.”

Salaries are rising more quickly in the North than in the South. By region, the North East leads annual salary improvement, with a 13.7% average increase compared to December last year. It’s closely followed by Yorkshire and The Humber (12.3%), while the North West (10.3%) manages to keep up with the rest of the pack, remaining comfortably ahead of the UK average (6.9%). Salaries in the South East lag behind at 7.7%, while London salary growth falls below the UK average with a year-on-year increase of just 6.6%. 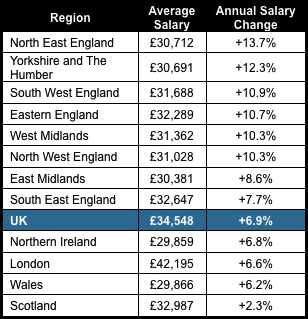 However, the Northern advertised salary surge is partly being driven by a growing skills shortage in these regions, all of which contain cities with the fiercest job competition in the UK. Three of the top five worst cities to find a job are located in the North West: Salford, with 7.91 jobseekers per vacancy, The Wirral (7.82) and Rochdale (5.24). Sunderland (7.52) and Hull (4.60) make appearances in the top five representing the North East and Yorkshire and the Humber respectively.

Sunderland exhibits this trend most starkly: with 7.52 applicants for every job, employers should be able to name their price. But advertised salaries in Sunderland have grown by 38% since December 2014 – a clear sign that employers are trying to attract the skills they need from outside the city.

Andrew Hunter, co-founder of Adzuna, comments: “Individual cities can’t be taken blindly as representatives for entire regions – but they are useful indicators. An advertised salary increase can often mean that employers are struggling to fill positions from their local talent pool. By raising advertised salaries, they hope to attract better qualified candidates from other regions.

“Combined with the high competition for jobs we’re seeing in the North, a logical explanation is that employers are struggling to fill positions due to a lack of skills applicable to the sectors thriving there. David Cameron has made funding for apprenticeships a core part of his re-election campaign, and the figures bear this out as a sensible tonic for employment – especially in the North. Hopefully this proactive response to a clear mismatch in the UK employment market manages to transcend party lines in time for the general election.”

Workers in East Anglia the least happy with their pay

Looking at employment by job sector in December, administrative roles enjoyed the largest annual wage growth. The average advertised salary was £23,528 for jobs in the Administration sector in December 2014, an increase of 19.0% since the same month last year.

Manufacturing and Trade & Construction jobs remain in the top five biggest improvers on a yearly basis. Vacancies in the Manufacturing sector were advertised with an average salary of £30,781 in December – a 15.7% increase on December 2013. Jobs in Trade & Construction saw similar successes, with salaries increasing 11.4% in the twelve months to December 2014 to reach £38,773.

Andrew Hunter, co-founder of Adzuna, explains: “Administration jobs are the vanguard of the jobs market. In tough times, they’re the first casualties of shrinking business. Now that things have turned around, this healthy annual growth is a sign that we’re making our way out of hostile economic territory. This is a much-deserved pay bump for the employees that keep such a vast range of enterprises ticking over – a sign that we’re heading back to the safer havens of prosperity we’ve gone without for some time.

“Supporting roles in administration and customer services have fought hard to keep up during the recession. But with an unflappable core of manufacturing and construction driving the labour market forwards, it was almost inevitable that businesses would need to start attracting talented support staff.”

Only the Energy Oil & Gas (-1.9%) and Legal (-0.1%) sectors experienced wage decreases in December compared to the same month last year. Average advertised salaries in these sectors were £46,168 and £44,908 respectively.

Andrew Hunter, co-founder of Adzuna, explains: “Jobs in the Energy, Oil & Gas Sector have been through a rough patch – and the end isn’t in sight. The political rumblings North of the border, where many of these jobs lie, have been put to bed. Almost as soon as the geographical heart of the sector, Scotland, started to pick up the pieces, the price of oil fell through the floor.

“Many large-scale operations, plans for expansion and, unfortunately, pay-scales, simply do not make sense when energy commodities are trading at under half their previous price. With Ed Miliband promising to freeze energy prices if he wins the general election, this sector’s vulnerability to the tides of political change is becoming ever-more apparent.”