Congestion-Busting 'Keyhole For Roads' Fleet Prepares To Hit The Highway

Four new trucks tooled up with trailblazing technology will be taking to the highway this autumn on a mission to slash repair times wherever they can.

One of the four specially adapted Mercedes Ateco trucks, which will be used by National Grid in its London area patch, was unveiled at Windsor Racecourse on Thursday 19 September this year.

The bespoke new trucks have been developed for National Grid by German engineering company RSP/TT in partnership with Hitachi Capital Commercial Vehicle Solutions.

The 'keyhole for roads' technology was first used by National Grid in the USA, its potential for use in the UK was identified and it was specially adapted for use on British roads.

'Keyhole for roads' works by drilling a small hole measuring 18 to 24 inches in the road and then removing a single 'core' in as little as half an hour before sucking out the soil. Repairs are then carried out using special long handled tools which are able to reach down to the gas mains to complete repairs. The soil is then returned and compacted before the 'core' is put back using a special sealant. Once this is complete the road is ready to reopen in around one hour – much faster than when using conventional methods of digging and reinstatement.

Since being introduced to British roads in 2009 Keyhole technology, which is also known as Core and Vac, has shaved hundreds of days off repair times. 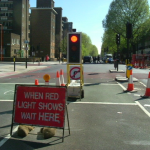 Now revamped to make it even more efficient the new wave of trucks can carry out repairs on their own, without the assistance of a second vehicle – freeing up road space and further reducing congestion.

Head of Operations Gas Distribution London Network Phil Clarke said: "Keyhole is amazing – in less than one day we can carry out repairs on some of our gas mains which would once have taken us a week, this means much less congestion for road users.

"We hope that investing in this new fleet will build on the successes already achieved with keyhole for roads, and improve life for road users even more."

Although it's not suitable for every repair job and can't be used for gas mains replacement jobs the use of keyhole technology is helping to dramatically improve the traffic situation on Britain's busy roads. Two more of the new trucks will also be deployed to National Grid's North West region.

Ed Syson, Director of Operations, National Grid Gas Distribution added: "Investing in this keyhole technology is all part of National Grid's ongoing commitment to innovation to ensure we keep people connected to their energy supplies with as little inconvenience as possible."