WEST KALIMANTAN: Dramatic footage released today shows starving orangutans being rescued from an oil palm concession in Borneo after their forest homes were bulldozed by a member of the Roundtable on Sustainable Palm Oil (RSPO), in flagrant violation of the body’s rules.

Conservationists have urged oil palm firm Bumitama Gunajaya Agro (BGA) to cease further clearing immediately amid credible concerns that more of the endangered species are trapped inside the concession and will die if not relocated.

According to RSPO statutes BGA should have carried out High Conservation Value assessments prior to clearing in the concession, setting aside areas that are home to the endangered species.

However, International Animal Rescue Indonesia (IAR Indonesia) and government conservation staff have already rescued four orangutans, including a pregnant adult and a baby, from the concession in Ketapang Regency, West Kalimantan. Other individuals remain at risk if BGA continues to ignore RSPO rules.

Adi Irawan, Program Director of IAR Indonesia Foundation in Ketapang, said: “We know that there are more orangutans isolated in small patches of forest in this plantation along with other protected wildlife such as proboscis monkeys.

“All the animals in this plantation are under threat and therefore this company should stop all land clearing immediately, carry out habitat assessments and develop strategies to protect all the endangered wildlife in their estate”.

The concession is operated by BGA subsidiary PT Ladang Sawit Mas (LSM) in a forest buffer next to Gunung Palung National Park, an area that hosts one of the largest populations of Central Bornean orangutan (Pongo pygmaeus wurmbii) in West Kalimantan. 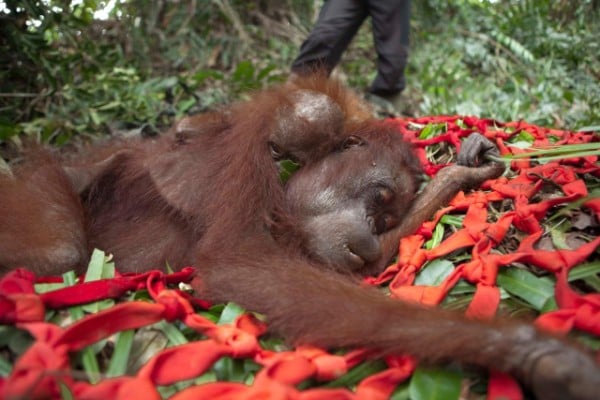 An adult female orangutan who was rescued with her baby by IAR Indonesia in Ketapang, March 2013
The footage released today shows IAR Indonesia’s Orangutan Rescue Team and the Regency Agency for Natural Resources Conservation (BKSDA) rescuing the orangutans from areas cleared by LSM, to move them to areas with sufficient food for their survival.

Karmele Llano Sanchez, Executive Director of IAR Indonesia Foundation, said: “We were appalled to see the condition of these rescued orangutans. All of them had gone through long periods of starvation before we rescued them, as the area where they were found, since the company had cleared most of the forest, was too small to provide them with enough food.

“One of the rescued orangutans had lost her baby, probably killed before the rescue team arrived. More orangutans could die if this company does not take immediate action”.

According to Indonesian Law Act Number 5 year 1990 concerning the Conservation of Living Resources and their Ecosystems the killing of orangutans or other protected wildlife is prohibited and can be severely punished.