Finding consistently growing companies has been and continues to be a tough thing with the world’s developed economies barely growing.

From the investor’s perspective, I think consistency, both in terms of corporate financial growth and stock market performance, is absolutely golden. This is especially the case for investors who aren’t actively trading and are perhaps saving for retirement or are in retirement and want some security with their equity holdings.

One company that I regularly view as an excellent long-term enterprise for savers is PepsiCo, Inc. (PEP). PepsiCo is a drink and snack business that has consistently delivered on management forecasts. The company has a solid track record of increasing dividends over time, and its long-term performance on the stock market has, to date, offered a stable uptrend. The company’s 35-year stock chart is featured below:

PepsiCo has been a stellar performer on the stock market since the beginning of the year. Like a number of other blue chips that delivered on their promises (Johnson & Johnson [JNJ], for example), the company provided the Street with exactly what it was looking for. (See “This Star Pharma Company Delivers the Goods Once Again.”) 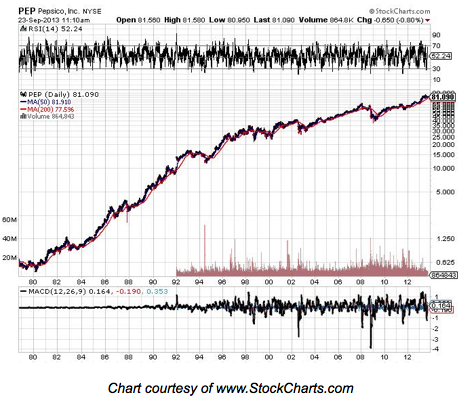 With a current dividend yield just shy of three percent, PepsiCo is a company that a long-term equity investor can build a position in over time and still be able to sleep at night. It’s also an attractive equity investment in which to consider a dividend reinvestment plan. A company that pays rising dividends combined with an investor who reinvests those dividends into new shares compounds wealth. It’s an old-school and simple way to get your money working for you instead of the other way around.

The most profitable operating division in terms of gross dollars is actually the company’s Frito-Lay North America business. In terms of operating profits, PepsiCo’s domestic snack business could actually be considered highly profitable in relation to any mature enterprise.

Also notable in the company’s second quarter this year was a huge increase to its cash position, in spite of additional restructuring charges. The company’s cash balance soared to $7.8 billion, up from $6.3 billion in the same quarter last year, including a dividend increase.

One Wall Street firm recently lowered its earnings outlook on PepsiCo for the third quarter, this fiscal year, and next year. But in my view, a missed quarter is an opportunity with this kind of blue chip business.

This is a company that’s worth accumulating when it’s down; and it’s proven over time that it’s never down on the stock market for long.

Government’s ‘rehabilitation revolution’ shown to be a hollow promise