Copeland in the Lake District is the last local authority area left in Britain where the average house price is less than three times the average annual salary, according to new analysis published today (Monday 1st September 2014) by the TUC.

Over the last 16 years the number of ‘easily affordable’ local authority areas across Britain has fallen from 72 to just one – Copeland in the Lake District. However, house prices in neighbouring South Lakeland are now eight times the average local salary – showing that the rest of the Lake District is by no means an affordable area to live, says the TUC.

The TUC research shows that there are no longer any areas in the South of England (the South East, South West, London and the East of England) where average house prices are less than five times the average wage.

To date, the debate around housing affordability has centred on London and the South East. But the research shows that areas across the country – from Rotherham to Norwich – are becoming out of reach for local people as the combination of rising house prices and low wage growth mean it’s set to get even harder for them to get onto the local housing ladder.

Back in 1997, around one in ten local authority areas were ‘out of reach’ – with average house prices more than five times local salaries. However, over the last 16 years, the number of ‘out of reach’ areas has increased eightfold, with 84 per cent now having house prices at more than five times the local salary. The affordability ratio of five is particularly significant, says the TUC, as the Bank of England has recently instructed banks to limit the proportion of mortgages they offer that are more than 4.5 times applicants’ salaries.

The TUC research shows that property prices in many of the UK’s previously ‘easily affordable’ areas are becoming out of reach for local people. In areas such as Stockton-on-Tees, Boston and Luton, house prices are now more than five times the average salary.

All of the top five least affordable areas of the country are in London. The Royal Borough of Kensington and Chelsea is top with average house prices more than 30 times the average local salary. Elmbridge in Surrey is the least affordable area outside London with an affordability ratio of 14.3.

The TUC believes that the combination of soaring house prices, stagnating wages in the run-up to the crash and the longest real wage squeeze in over a century have left house prices more out of reach than ever before. Whilst average house prices have yet to reach their pre-recession peak in many parts of the UK, falling real wages mean that homes have not become any easier to buy for local people, says the TUC.

“London always comes out top when it comes to horror stories about ludicrously over-priced housing.

“But the toxic combination of rising property prices and falling real wages has meant that local housing affordability remains a huge problem for millions of people across the country.

“Houses and flats in traditionally affordable areas of the country – from Kirkless to Great Yarmouth and Plymouth to Oldham ­– are now out of reach for many local people.

“We need an ambitious programme of home-building to get house prices back under control. At the same time, the growing number of people who have no hope or desire to buy a property any time soon but are still being clobbered by soaring rents need a better deal too.

“But housing affordability isn’t just about house prices, decent wages are just as important and there is a lot of ground to make up before we return to the kind of salaries that people were earning before the crash.” 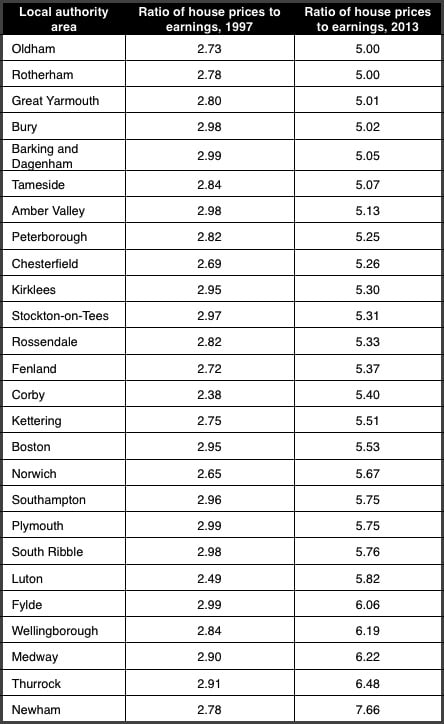