If you had to choose, which one of the following party leaders would you most like to have as a neighbour?

With the election fast approaching, the UK’s leading property marketplace, TheHouseShop.com, have commissioned a YouGov survey to discover which political party leader Brits would most like to have living next door.

The results were closer than you may expect with just 1% separating Corbyn and May. When excluding “don’t know”s, 36% of Brits wanted Jeremy next door, while 37% opted for Theresa as the best neighbour.

Nicola Sturgeon was next best neighbour for Brits with 15% of the vote, while Tim Farron came in 4th with 10%, and UKIP’s Paul Nuttall came last with a lacklustre 3%. 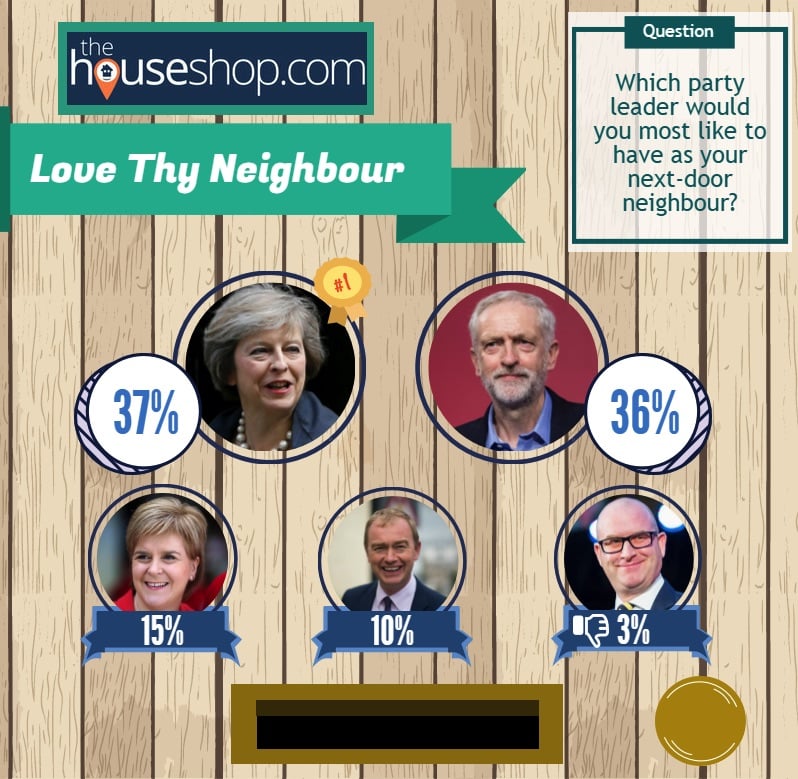 While the overall results showed Corbyn and May almost neck and neck, the results for different age groups showed a much more significant contrast – with younger age groups clearly favouring Jezza, but older generations choosing Mrs May.

In the 18-24 year old age bracket, Mr Corbyn swept to victory with 62%. Nicola Sturgeon came second with 13%, while Mrs May only managed to tie for third place with Tim Farron at 10% (excluding “don’t know”s).

Corbyn was also popular among students with 56% wanting to live next to Jez, followed by Ms Sturgeon with 16% in second place, then Farron and May in joint third place with 13%

The competition between Jeremy and Theresa evened out among 35-44 year olds, with both tied at 33%. But the balance shifted sharply in Mrs May’s favour among the over 55’s, with 54% compared to Corbyn’s 23%.

It was also interesting to note that Nicola Sturgeon was preferred over both Tim Farron and Paul Nuttall among all age groups.

Nick Marr, co-founder of TheHouseShop.com, comments on the results:

“Brits definitely have a bit of a love-hate relationship with their neighbours, and it was interesting to see that despite the Conservative’s larger lead in the polls, Theresa May and Jeremy Corbyn were pretty much neck and neck in the good neighbour stakes.” 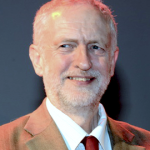 “What really stood out from the results was the clear generational divide among the public. Younger generations clearly favoured Mr Corbyn as the best party leader to have next door, with a sizable 62% choosing Jez as the best neighbour. But going up through the age groups, the results start to reverse and by the time we get to the over 55’s, Theresa May becomes the firm favourite.”

“While younger people clearly like the idea of having a chat with Jezza over the garden fence, older generations were more inclined to trust Mrs May with their spare set of keys.”

While the nationwide results showed a close call between May and Corbyn, the regional picture was quite different. 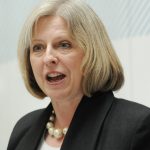 Theresa May was a clear winner as best neighbour in the South of England, with 45% of the vote in the South East and 43% in the South West when excluding “don’t know”s (compared to Corbyn’s 29% and 37% respectively).

Perhaps unsurprisingly, Scots wanted Nicola Sturgeon as their next door neighbour with 42% selecting Ms Sturgeon, while Corbyn and May tied for second among Scottish respondents with 25% each.