As long as Jeremy Corbyn remains as its leader, the Labour Party is effectively a party of unilateral nuclear disarmament – but it goes far wider than that

Jeremy Corbyn does not support the UK’s independent submarine launched nuclear deterrent and has stated publicly that he would not conduct a nuclear release if he were Prime Minister. That means that whether the submarines and weapons were armed and deployed or not would make no difference under his premiership. The UK would have no deterrent all the while he was in charge.

It would not matter what any of his cabinet, the Parliamentary Labour Party or his party members wanted because it is the PM that orders the strike (or his appointed deputy in exceptional circumstances). They would have to oust him first.

There may well be of course a ploy buried in there to get back support from the SNP as well garner some from the Green Party and attract disaffected Liberal Democrats. But that would be more than offset by losing (shadow) ministerial support and a good number of his own party members in the process. He has already drawn non-supportive comments from various members of his new cabinet team.

But there are other serious implications. Should Jeremy Corbyn ever gain the keys to Number 10, NATO will have to write the UK out of its plans. As a part of NATO, although the UK deterrent is independent, any nuclear release would almost certainly be done in conjunction with other NATO powers. Just like air strikes you need to have some sort of plan of non-interference for all the ballistic and cruise missiles as well as aircraft with bombs. With the UK’s submarine launched nuclear missiles taken out of the equation on the say so of the PM’s reluctance to use them, the UK would be sidelined. Then there would be the issue of our seat on the United Nations Security Council; without a credible nuclear weapons policy how long could we argue to stay in?

Also, would Mr Corbyn want to prove that he would never use them by visibly breaking our Continuous at Sea Deterrent (CASD)? What about any instructions that the submarine Commanding Officer has onboard in case the UK is obliterated? Would they just read 'find somewhere else to go'?

The UK nuclear deterrent has been a massive success in that, as part of NATO, it prevented the Cold War from becoming a hot war as well as keeping certain states expansionist policies in check – the EU had little if nothing to do with it, despite what it would have you believe.

“The Labour leader is effectively saying he would lower Britain’s defences. Deterrents don’t work if you’re not prepared to use them. Having nuclear weapons and our enemies knowing that we’re prepared to use them in the most extreme circumstances of self-defence is vital to keeping our country safe.” 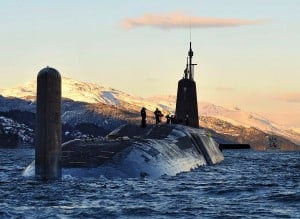 Mr Hookem went on to say: “I know there have been media reports of Corbyn being sympathetic to terrorists organisations in the West Bank, Ireland and Iran; but to commit himself to scrapping the UK’s nuclear deterrent and leaving this country defenceless in a world full of nuclear proliferation, is short sighted and nothing short of dangerous.”

“Does Jeremy Corbyn not realise that we now face nuclear threats from countries such as North Korea, Pakistan, Iran; and if recent reports prove correct, even from our old cold war adversary, Russia?”

“And those are just the state actors!”

“Terrorist groups around the world have been looking to acquire nuclear technology for years. With the unstable situation in the Middle East and North Korea exporting nuclear technology to the highest bidder, who knows what could fall into the hands of terrorists hell bent on threatening our people.”

“The world has never been so dangerous and Jeremy Corbyn needs to wake up and realise the facts rather than living in some 1980’s ultra left-wing, utopian, dream world.”

Winsor Report – Part 2 (The death of the Police Service)