Could Gold Surprise Investors in 2014?

The demand for gold bullion is increasing. Each day there’s more evidence that suggests this phenomenon will continue. We see consumers buying gold bullion across the global economy. As a result, mints are working in overdrive mode to meet this demand and gold storage facilities are looking to add more vaults.

The Brinks Company (NYSE/BCO), UBS AG (NYSE/UBS), and Deutsche Bank Aktiengesellschaft (NYSE/DB) are opening new vaults in Asia. What’s their reasoning for taking this step? The demand for gold, especially from China, has increased.

Regarding vaults, the general manager of Brink’s in Singapore, Baskaran Narayanan, said, “We need additional capacity, so we have to take further space.” He added, “There’s a surge in demand for precious metals in Asia, and one can see the focus and movement from the west to the east.” (Source: Larkin, N., et al., “Gold Flows East as Bars Recast for Chinese Defying Slump,” Bloomberg, January 28, 2014.)

Mints cannot meet the demand. The Austrian Mint, for example, was forced to hire more employees and add more time to the daily shifts worked. This wasn’t enough. Even while operating 24 hours a day to meet the gold bullion demand, the mint is failing. (Source: Roy, D., “Gold Mint Runs Overtime in Race to Meet World Coin Demand,” Bloomberg, January 27, 2014.) 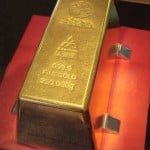 But there’s something else happening that could cause a further increase in the demand for gold bullion, and that’s a currency crisis in the emerging markets. Currencies in countries like Turkey, Russia, South Africa, and Argentina have seen massive declines. The central banks look worried. The central banks of Turkey and South Africa have raised their short-term interest rates. This move is creating uncertainty that may cause investors to run to safety, which is what gold bullion is usually considered to be in these situations.

The downtrend in gold bullion prices, which had been in since September of 2013, seems to be broken (look at the black line in the chart above). We also notice that gold bullion prices have broken above their 50-day moving average (MA)—a move that shows there’s a bullish presence in the short term (see the circled area and the blue line).

With all this happening, my opinion on gold bullion hasn’t changed. I remain bullish on the yellow metal, because I believe the demand and supply situation will cause prices to increase. I can’t place a specific target on where gold bullion will end in 2014, but it might just surprise investors.

Those investors who believe gold bullion prices will increase further may profit from the move by looking at gold producers that have proven reserves in safe geographic areas. Massive discounts are still available despite the gold sector increasing roughly 10% since the beginning of the year.

This article Could Gold Surprise Investors in 2014? by Mohammad Zulfiqar, BA was originally published at Daily Gains Letter.

SME owners are divided on chances of Brexit success