Bristol City Council, which is the area’s largest employer, has defended its decision to advertise the availability of two trainee management positions but accepting applications from ethnic minorities only.

Normally posting a job with racial requirements would be considered highly illegal. But both jobs, reference number 22130, are posted under section 37 of the Race Relations Act 1976, which allows for these types of job adverts where the proportion of ethnic minority workers in that area are not in proportion to those living in that area.

The council claim that Black and Minority Ethic (BME) people make up only 7%b of the relevant staff where the local population is made up of 12% BME.

They also say that this is a two year trainee position with no guarantee of a job at the end of it and that other schemes are open to all-comers.

In the current job climate advertisements like this are bound to come under fire, so it may show some lack of sensitivity in placing it.

There is also the question of what would happen to the jobs should no suitable applicants come forward. Would they be re-advertised to all comers? If not, then are the jobs actually needed or have they just been placed for political purposes? Â If that is the case then is that good use of public money in the current economic climate?

The relevant section of the Act:

(a)affording only persons of a particular racial group access to facilities for training which would help to fit them for that work; or

(b)encouraging only persons of a particular racial group to take advantage of opportunities for doing that work,

(i)there were no persons of that group among those doing that work in Great Britain; or

(2)Where in relation to particular work [F2it reasonably appears to any person] that although the condition for the operation of subsection (1) is not met for the whole of Great Britain it is met for an area within Great Britain, nothing in Parts II to IV shall render unlawful any act done by [F2that person] in or in connection with—

(a)affording persons who are of the racial group in question, and who appear likely to take up that work in that area, access to facilities for training which would help to fit them for that work; or

(b)encouraging persons of that group to take advantage of opportunities in the area for doing that work.

F3(3)The preceding provisions of this section shall not apply to any discrimination which is rendered unlawful by section 4(1) or (2).] 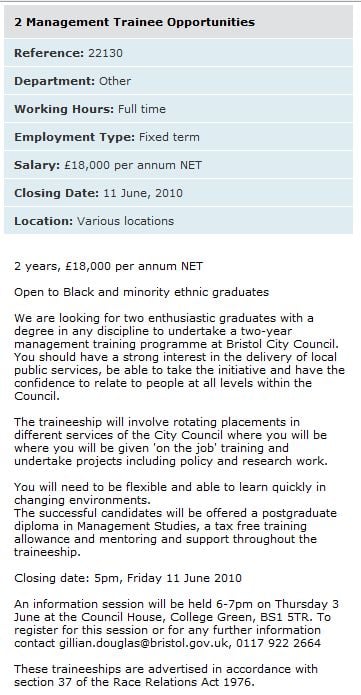