We expect average house price growth in Great Britain to fall to 1.5% in 2017 compared with 5% in 2016.  While the first half of 2018 is likely to be more difficult, we forecast prices to end the year 2% higher.  By 2019 we expect house prices to be growing at an annual rate of 3%. (See the table below for national and regional breakdown.)

House price growth is forecast to slow across all GB regions over 2017 and into the first half of 2018.  We expect a recovery in growth rates beginning from mid-2018 and continuing into 2019 as wage growth returns. 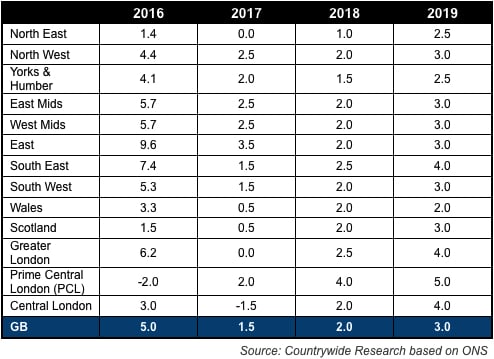 Weaker economic conditions will act as a brake on price growth as inflation eats into household incomes.  We expect interest rates to begin to rise very slowly, from the spring/summer of 2018 but for wage growth to rise also, helping household budgets to recover.  Rising interest rates and a more cautious approach from lenders – partly directed by the regulator – will prevent a faster increase in price as wage growth picks up.

As Brexit negotiations continue, confidence will be volatile which will have implications for the pace of economic and housing market recovery.  The outcome of these negotiations is the biggest risk to performance and is weighted to the downside.

Despite little recovery in the levels of housing transactions – due to affordability issues and fewer buy-to-let purchases – the rate of new building is not expected to gather enough pace over the next two years to catch up with previous shortfalls.  A lack of supply will therefore continue to support the level of price growth.

“Economic conditions for households will remain challenging over the next year as inflation eats into budgets and interest rates begin to rise.  In addition, fewer landlord purchasers and the later age at which people buy, is affecting the level of demand.  But we expect the UK economy to recover and wage growth to pick up in response to global growth.  That, combined with a continued lack of housing supply, will help to support house prices.

“The housing market is sensitive to confidence which will be affected by the outcome of Brexit negotiations and the implications this will have – particularly on employment.”

Aliens and the London 2012 Olympics