The private bank Coutts has been fined Â£8.75 million by the Financial Services Authority for Anti-Money Laundering failings.

The Anti-Money Laundering (AML) problems at Coutts were, said the FSA, “…serious, systemic and were allowed to persist for almost three years. They resulted in an unacceptable risk of Coutts handling the proceeds of crime.”

The bank, whose history stretches back to 1692, has been owned by the Royal Bank of Scotland since 2000 and their client list includes Her Majesty the Queen, pop stars and high profile sports people.

Because the bank co-operated and agreed to settle at an early stage it qualified for a 30% discount on the fine, which would otherwise have been Â£12.5 million. Coutts said that it has now put in place robust AML measures. (Wonder if they had to ask the Queen for her passport or driving licence and proof of address.)

The problems for Coutts stemmed from a 2010 visit by the FSA, which found that the bank was “…failing to take reasonable care to establish and maintain effective anti-money laundering (AML) systems and controls relating to high risk customers, including Politically Exposed Persons (PEPs).”

The FSA found AML related problems in nearly 75% of client files and it says that:

Specifically, in one or more of each inadequate file Coutts failed to:

The acting director of enforcement and financial crime for the FSA, Tracey McDermott said:

Coutts’ failings were significant, widespread and unacceptable. Its conduct fell well below the standards we expect and the size of the financial penalty demonstrates how seriously we view its failures.

Coutts was expanding its customer base which increased the number of high risk customer relationships.Â  The regulatory environment in relation to financial crime had also changed.Â  It is therefore particularly disappointing that Coutts failed to take appropriate steps to manage its AML risks. This penalty should serve as a warning to other firms that, not only should they ensure they constantly review and adapt their controls to changing financial crime risks within their businesses, but that they must also make changes to reflect changing regulatory or other legal standards. 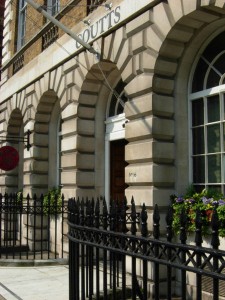