The Consumer Prices Index (CPI) annual inflation rate fell from zero percent in August 2015 to -0.1 percent in September. This was down to a smaller than usual rise in the cost of clothing and falling motor fuel prices said the Office for National Statistics (ONS).

The rate of inflation as measured by CPI has now been at or around the zero percent mark for most of 2015.

When including the costs for homeowner/occupiers using the unofficial CPIH measure, the rate of inflation was 0.2 percent in the year to September 2015, down from the 0.3 percent seen in August. 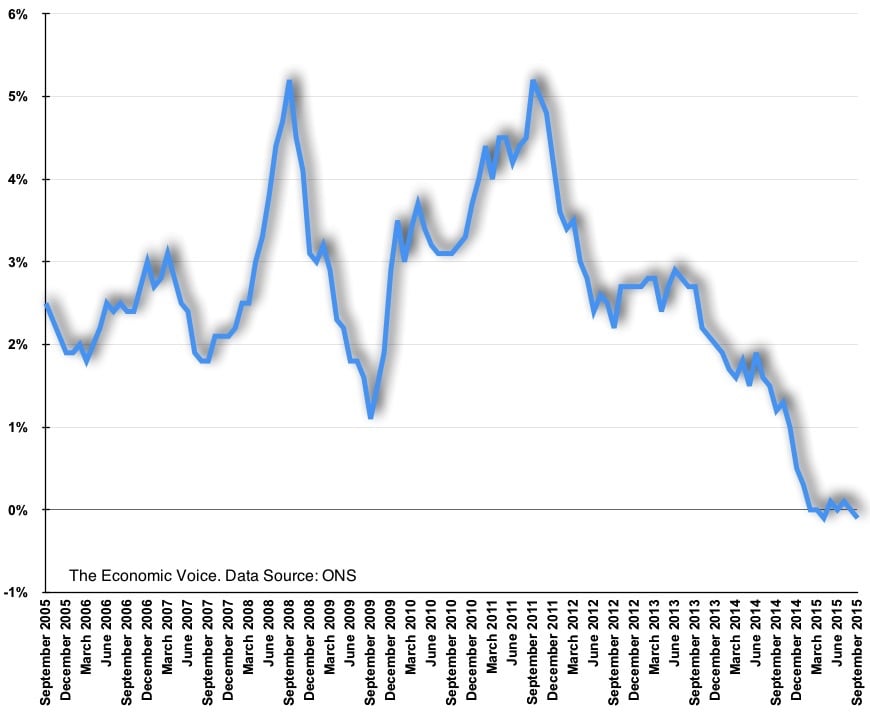 “There will be plenty of people ready to celebrate another month of rock-bottom inflation. Falling food and fuel prices have boosted the spending power of households across the country and businesses can spend less on moving goods and people across the world and more on paying down debt, investing in equipment, hiring staff, or offering pay rises. This has led to impressive pay growth and productivity gains in the private sector after years of stagnation and should see business investment continue to grow.

“Inflation has hovered around zero for a little longer than we might have expected, but it is not yet time to sound the alarm bells. The real test will come around the turn of the year, when last year’s dramatic drop in the price of oil falls out of the calculations and we should see inflation start to climb back up. For the moment, this is still a win-win scenario for businesses as demand picks up and the cost of resources comes down.

“We remain concerned that this temporary period of abnormally low inflation is blinding central bankers to the need to begin normalising interest rates. The Bank of England’s job is to set interest rates for the medium-term, where inflation is set to pick back up towards the two per cent target. Core inflation, which strips out some of the more volatile factors putting downward pressure on the headline rate, remains a steady one per cent. Every month where interest rates linger at 0.5 per cent, Carney binds his hands a little tighter and takes options off the table for the future. After such a prolonged period of extraordinarily low rates, they will have to rise gradually and incrementally, but the longer we wait the harder that will be.”

“The drop in annual CPI inflation to -0.1% in September from zero in August was slightly below the consensus expectation of no change. September’s decline in prices was driven primarily by a smaller rise in clothing prices than occurred in September 2014. Falling petrol and energy prices also played a role, with pump prices down by 3.7p per litre on the previous month.

“As to where the latest number leaves inflation prospects in the near-term, CPI inflation in October will, all else equal, be pushed down by the effect of university education costs, with the effect of 2012’s jump in tuition fees finally washing out of the data. So another negative reading in October is not out of the question.

“Inflation should still see some rebound when the anniversary of the fall in oil prices in late 2014 is reached. But the path back to the MPC’s 2% target looks like it is going to be a slow one. Indeed, the minutes of October’s MPC meeting noted that the Committee does not expect CPI inflation to return to 1% until the spring of 2016.

“Overall it is not difficult to see potential barriers to inflation making further progress back to the 2% target. Further weakness in the global economy could lead to renewed falls in oil and other commodity prices. A continuation of the strong growth in productivity seen in Q2 would also depress unit labour costs and domestically-driven inflation. So our central case for no rise in Bank Rate until the third quarter of next year remains, with the environment for inflation meaning that the risks to that forecast remain firmly to the downside.”

“This shouldn’t be cause for concern. Today’s result is simply evidence of how the UK economy is delivering at the moment – not exactly a steam train bounding ahead at full speed, but certainly enough to keep things moving along at a steady enough pace.

“Yes, the inflation outlook is a little soft, but wage growth is increasing and retail consumption is on the up, which will help to drive things forward over the next few months. Though the effect of the oil price falls is slowly fading, this and global disinflationary pressures are still threading through. All in all, though, today isn’t damaging, and the Bank will simply see this is as confirmation of its decision to hold off a rate hike until domestic price pressure begins to rise.”

“Inflation is back in negative territory again and it’s very unlikely that we’ll see the Bank of England raise interest rates this side of Christmas. Although wage pressures are emerging and the impact of the falling oil price will soon start to drop out of the numbers, a rate hike would have a deflationary effect by pushing up Sterling. At a time when the ECB is signalling it is ready to expand QE and the Fed is likely to delay its own rate lift-off into 2016, the Bank will be fearful of allowing Sterling to appreciate too much.”

“Inflation stuck ‘at or around zero’ suggests the recovery is not fully secured and that future living standards gains cannot be taken for granted. And with the UK’s economic prospects remaining uncertain, rate rises this year must now be off the agenda.

“Our economy is not out of the woods yet. We need significant investment in skills, innovation and infrastructure to boost productivity and ensure we have a recovery that works for the many and not just the few.”

“The slight deflation in the UK economy is good news for the self-employed community. Lower prices keep business costs down at a time when this is a significant concern for many independent professionals. Our research has shown freelancers’ daily rate of pay improve in recent months and continued low inflation levels should make them feel better off in real terms.

“With most freelancers travelling considerably more for work than conventional employees, the fall in fuel prices and transport costs will be a welcome confidence boost for independent professionals. We remain far from the Bank of England’s target inflation rate of two per cent, so the Monetary Policy Committee should continue to take a cautious approach on the timing of raising interest rates.”

"The UK announced a fall in inflation of 0.1% this morning, behind analysts’ forecasts of 0%. Much will be written about this, with many likely suggesting that rate rises look ever more distant – a point of view with which we agree – and calling to question the Bank of England’s ability to reach the 2% target. Indeed, the market seems to think so: yields on the 10Y Government Bond have tightened by 1.2 basis points to 1.81% at the time of writing.

"Breaking down CPI into its component parts, it is interesting to note that the main detractor to consumer prices was transport, printing -2.5%, with the main price decrease coming from air travel (-20.4%), while Food & Non-Alcoholic Beverages posted a 0% print (after being consistently negative through most of 2015). The key reason for falling air (and sea) travel prices is the second order effect of falling commodity prices, most notably oil: as these input prices fall, airline (and ferry) companies can pass on lower prices to consumers. Food & Alcoholic Beverage prices flattening is likely due to a slower pace of price cutting by major supermarket chains.

"Overall, there is little to worry about – we expect inflation to pick up moderately as and when there is a stabilisation of commodity prices, but that it (and consequently interest rates) will remain structurally lower for longer."

“The marginal deflation in CPI for September will cost some pension schemes, as many base their annual increases on this month’s inflation figures.  Few schemes will be willing or able to actually cut pensions back, so many pensioners will get a small increase in real terms, albeit only 0.1%. A lot of scheme sponsors will doubtlessly be grateful that the figure isn’t higher given their continuing struggles against deficits.

“The true problem is likely to hit members of DB pension schemes with long service. A modest pay rise, possibly after years of pay restraint, could see them stung with a large tax bill this year by accidentally exceeding the annual allowance (especially after recent reductions in that allowance).”

Internet use amongst older people subject to North / South divide