The UK economy Consumer Prices Index rose 0.6 percent compared to a year ago

This rise of 0.6 percent is a slight increase in the 0.5 percent seen in the year to June 2016 and, although relatively low on a historical basis, is the highest increase seen since November 2014 says the Office for National Statistics (ONS).

Rising motor fuel, alcoholic beverage and accommodation services prices prices were the main contributors to the increase as well as a smaller drop in food prices than a year ago. These were offset in part by falls in social housing rent and prices falling for certain games and toys.

The unofficial measure of inflation that includes home owner/occupier costs (CPIH) rose from 0.8 percent in June to 0.9 percent in July. 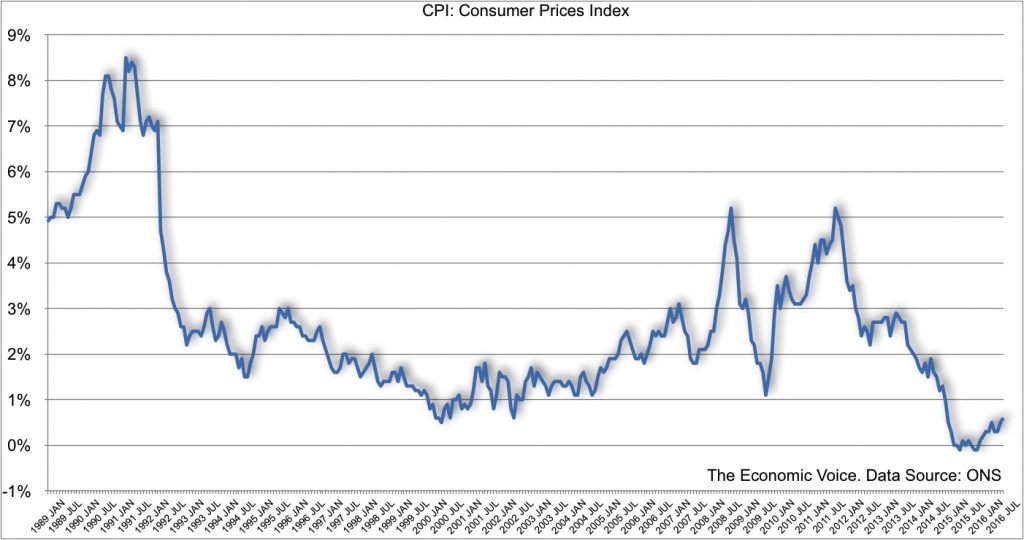 "The July rise in inflation heaps further woes on pension schemes that had already seen their deficits soar post Brexit as a result of the latest round of QE and falls in interest rates. With pension benefits being linked to inflation, deficits will likely worsen further, adding pressure on trustees and companies alike.

"Whether or not Brexit is good for the UK economy, it has certainly been calamitous so far for pension schemes which were already suffering massively in markets which have been extremely difficult. This latest news must increase the likelihood of the Brexit effect bringing down some companies and their pension schemes."

Martin Beck, senior economic advisor to the EY ITEM Club, comments: "Inflation reached its highest rate for 20 months in July but is still short of the 2% target. We are likely to see inflation continue to rise over the remainder of the year and to climb above 2% by early 2017. However, with core inflationary pressures remaining very muted, in line with the enduring softness of wage growth, we expect inflation to peak at 3%.

"Base effects will become increasingly important as the year progresses, particularly once last winter's steep fall in petrol prices drops out of the calculation. Sterling's recent plunge will also gradually start to feed through, with today's producer prices data suggesting that there is already some evidence that this is beginning to push up manufacturers' input costs.

"Therefore, while a rise in inflation is likely to bring an end to the recent improvement in household spending power, the drag from rising prices will not be as great as when we last saw the pound dropped sharply in 2008-09."

TUC General Secretary Frances O'Grady said: "The slight uptick in inflation is likely to be followed by further increases in prices as the weak pound feeds through to higher costs for every day goods.

"And following the decision to leave the EU there is a real threat to jobs and growth.

"That's why the TUC is calling for urgent government action to ensure working people do not pay the price for Brexit. The government should act now to increase investment in infrastructure, build new homes, announce plans for more high-speed rail and give the go-ahead for a third runway at Heathrow."

IPSE Economic Adviser, Lorence Nye, commented: "Another rise in inflation, particularly in fuel prices, makes it more expensive to run a freelance business, as this group typically needs to travel much further for work than a traditional employees.

"According to IPSE research released in July, the majority of freelancers expect business costs to increase in the next 12 months – today's figures are proof that those fears are well founded. Rising inflation will add pressures to the UK's flexible workforce – a vital part of our economy in a time of uncertainty and change.  "Although the Bank of England is not yet close to its two per cent inflation target, it has predicted that the rate will increase past that point by 2018. Therefore, they should exercise caution in order to prevent disproportionately pushing up business costs, which would have a dampening effect on the economy."

John Goodall, CEO and co-founder of peer to peer platform Landbay commented: "Brexit uncertainty alone was not enough to derail the UK housing market in June, as prices continued to rise steadily. High demand drove the uplift in prices, with mortgage lending volumes jumping 16% in June alone. Of course all eyes will be on next month's figures, and early indications suggest house prices growth cooled slightly in July, but if we do see an impact of the Brexit decision it will take some time to surface.

"What we do know is that the fundamentals of the property market are built on pretty immovable foundations; people always need a home. A growing UK population and record low mortgage rates will swell demand, and efforts to tackle the supply side are moving at a snail's pace although Theresa May has suggested housebuilding is high on the agenda. All this will continue to drive up prices, and make it even more critical that the UK has a healthy and accessible buy-to-let market to support those that choose not to or cannot buy a property outright."