Fears of a dramatic capital exodus following the victory of Greece’s anti-austerity party Syriza appear to have been overdone, according to first available financial data since the election that reveals only modest net outflows from the southern European nation.

The data, compiled by CrossBorder Capital in London, showed a total of $177 million flowed out of Greece in January, compared with $166 million in December and $149 million in November. Almost $2.4 billion had left the country in August, the highest figure seen last year.

Similarly, monetary conditions in the Greek economy showed no dramatic deterioration last month. CrossBorder Capital’s Global Liquidity Index™ showed a 64.3 reading for Greece in January, more than three times greater than the 29.0 reading registered a year earlier. A reading above 50 denotes expansion, a reading below 50 a contraction.

“The January data show that Greece has been more stable than many feared,” said Michael Howell, managing director of CrossBorder Capital, which has been compiling the GLI™ for more than 20 years. “It’s not the disaster many worried about. It may well be the case that money is being taken out of domestic banks and put in foreign-owned banks within Greece, but there is little sign that the economy as a whole is haemorrhaging funds.”

More worrying, said Howell, are developments three thousand kilometres north of Athens in Helsinki, Finland. Due to the Nordic economy’s proximity to Russia, flows out of the country reached $705 million in January, compared with $530 a month earlier. There has been a net outflow of funds from Finland in every month of the last two years, touching a high of $1.04 billion in Sept. 2014.

“It looks like money previously held by Russians in Finland is being repatriated as economic conditions worsen at home,” said Howell. “It may be that Finnish banks ends up being in greater need of ECB emergency funds than those of Greece.”

Globally, liquidity conditions continue to deteriorate, although with more than half of the world’s central banks running expansionary monetary policy, a slump will probably be averted, said Howell The Global Liquidity Index™ – which tracks the amount of money available for investment – showed a reading of 44.3 by the end of January compared with 48.1 reading a month earlier. 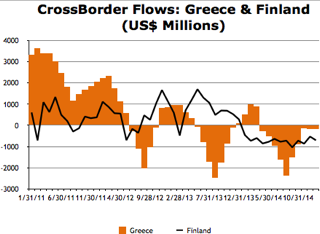