A leaked e-mail shows that the Crown Prosecution Service (CPS) uses a ‘Star and Tick’ system to keep lucrative and easy cases in house and allocate ‘messy’ and costly cases to the independent bar, says the Bar Council.

The leaked e-mail, which had reportedly been sent to 43 recipients*, has been redacted to remove names and published on the internet by the Bar Council. It lays out a clear encouragement to CPS lawyers to either place a tick or a star on the right hand corner of the brief backsheet to indicate how the case should be progressed post the Plea and Case Management Hearing (PCMH).

A star would show that the case is either a ‘high earner’ or where the case would ‘crack’ in the favour of the CPS because it was weak or witnesses would be unlikely to turn up.

A tick would be made for cases that the CPS did not want to do based on it either being messy and troublesome or just being a low earner.

In its statement on this it appears that the Bar Council suspects that this has been a long-standing practice, although the offending document itself is only dated 15th January 2013. 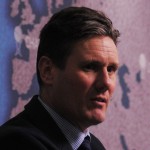 Maura LcGowan QC, Chairman of the Bar Council, said that “The public interest demands that the correct advocate is instructed to prosecute a case based on skill and the complexity of the case. Today, we are able to show, with incontrovertible evidence that the CPS is deliberately acting against the public interest and the best people are not being used to prosecute serious crimes.”

She did go on to say that the Director of Public Prosecutions, Keir Starmer QC, when told of this said that this procedure was unknown to him and that a full investigation would follow.

The DPP said that this email should not have been sent and does not represent CPS case management policy.

Bookies Take on the Stoke By-Election