With the Spanish economy returning to recession over the past six months, the fall of the Dutch Government due to a row over austerity, and the upcoming Greek and French elections, these are turbulent times for European policymakers. The hard-won consensus that took shape during 2010 is at risk from changes in leadership and direction throughout the monetary union. And the biggest loser could be Germany.

Governments in Greece, Portugal, Ireland, Italy and Spain have already changed since the crisis first broke, but thus far there has been consensus on the need to cut fiscal deficits and boost competitiveness. This may be unsurprising where technocratic regimes now hold sway, such as Italy and Greece. But traditional politically led administrations in Ireland and Spain have also been keen to emphasise their deficit-cutting credentials. However, the tide may now be turning.

While the Greek election is an obvious source of concern, the French election may have more impact. The socialist challenger, Hollande, is still comfortably ahead of the livewire Sarkozy in the polls. And if he is elected on Sunday Hollande has promised to renegotiate the so-called ‘fiscal compact’ between Germany and other euro area members. He thinks that the agreement does not put enough emphasis on growth.

It is easy to overstate the economic divergence here – after all, Hollande is still promising a balanced budget by 2017, only a year later than Sarkozy. But the emphasis on growth is shared elsewhere – Italian Prime Minister Monti has spoken about it recently, and even the ECB has been getting in on the act. Today’s May Day protests once again indicate the widespread public unrest that has taken hold. Protesters and increasingly politicians think that austerity alone is not enough. In many countries, it has made things worse. While the UK coalition government may not have much of a clue about how to kick-start activity, there is growing acceptance across the channel that austerity has actually plunged many economies there back into recession.

All of this points to a hardening against German orthodox economic thought. Germany, of course, has done rather well since emerging from recession, and the economy looks decidedly stronger than many of its peers. While other countries struggle under a fixed exchange rate that is too high to facilitate rebalancing, Germany has undoubtedly benefitted from an exchange rate that is too low. If the Deutschmark were reinstated tomorrow, it would soar in value against the euro.

Germany, of course, does not really want to admit this. German officials seek to muddy the issue by conflating competitiveness with productivity, and frequently only talk about one side of the internal imbalances that are rife in the euro area. The problem is that other countries are increasingly waking up to the fact that the Germans only appear to be in it for themselves. A steadfast refusal from Berlin to countenance any overt form of burden-sharing, while at the same time rebutting calls for stronger German domestic demand that would significantly ease the necessary and ongoing adjustment in struggling euro economies, has left a bad taste in the mouth. Spain is not Germany; austerity can have a very different dynamic impact, depending on where you start from. 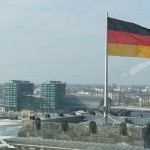 All of this suggests that maybe, just maybe, a truly momentous event really could be lurking on the horizon. For all the talk about Greece or other strugglers leaving the single currency, the biggest impact would be Germany leaving. If Hollande can win enough support – and the signs are that Italy, Spain and the Netherlands could join him, not to mention Ireland, Portugal and Greece – then Germany could find itself opposing an argument for more growth and a bit less austerity. If it found itself arguing against the other four largest economies in the euro (plus friends), it might even lose. Yet if the fiscal compact is torn up, will Germany continue to put up with back-door bailouts by the ECB? As long as Germany is in the euro it will still ultimately be on the hook for losses the ECB suffers, whether they arise from its direct holdings of bonds or losses passed on by counterparties. Although the likelihood is slim, the chance of Germany retreating to lick its wounds is non-negligible.

For most people in other euro countries, Germany leaving the euro would probably be good thing. Unfortunately for Germany, it would also expose the beggar-thy-neighbour nature of its much-heralded export-led growth model. Would Berlin be prepared to compromise on austerity to avoid losing this engine of growth? Regardless of what happens in Greece, developments in France and the Netherlands could soon herald crunch time for Germany’s role in Europe.

Image by Hynek Moravec (Own work (my own picture)) [GFDL (http://www.gnu.org/copyleft/fdl.html) or CC-BY-3.0 (http://creativecommons.org/licenses/by/3.0)], via Wikimedia Commons