• “British supermarkets could soon see influx of Cumberland Sausages made in Alberta or Cornish pasties made in Manitoba.”

The Government has failed to protect any geographically listed British produce from competition in a trade deal soon to be ratified between the EU and Canada.

The failure means that produce such as Cumberland sausages, Arbroath smokies, Cornish Pasties, Jersey royal potatoes and Yorkshire Wensleydale will be open to competition with Canadian imitations should the agreement come into effect.

The investment deal known a CETA (the Comprehensive Economic & Trade Agreement) is a sister agreement to the better known US-EU deal TTIP (the Transatlantic Trade & Investment Partnership). CETA has already been signed by EU and Canadian negotiators and is now awaiting ratification. The treaty text shows that other European countries have managed to successfully obtain exemptions for geographically listed produce including feta and parmesan cheeses and German and Czech beer. Such produce receives special status under EU law so that traditional production methods and quality can be protected, but such status doesn’t automatically translate into trade agreements. 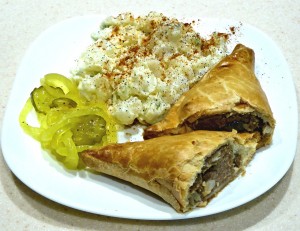 Global Justice Now is part of a European-wide coalition to stop the deal being ratified. Campaigners believe that the deal is a threat to environmental and social regulations, as well as public services. Over 2.5 million European citizens have signed a petition opposing CETA and TTTIP in just under 12 months.  At the centre of the agreement is a ‘corporate court’ mechanism known as ISDS (Investor State Dispute Settlement) which allows corporations to sue states in secret tribunals when they feel they have been treated unfairly.

These ‘courts’ have been used to sue countries for putting health warnings on cigarette packets, for raising the minimum wage and for banning cancer-giving toxins. Canadian mining corporations have been particularly aggressive users of such corporate courts, with one taking legal action against Romania for not allowing a toxic and unpopular mine to go ahead recently.

“The British government has repeatedly told us that when negotiating TTIP and CETA we don’t need to worry that things like food standards will be undermined. But here we find a case where they don’t even appear to have tried to protect iconic produce from this country. This goes to show that we can’t trust anything the British government say on these trade deals. If we want to protect food quality, environmental regulations, public services or the right of people to have the final say on our laws, we have to stop CETA and TTIP.”

The MPC’s forecasts and the yield curve: predictions versus promises