Spurning the affections of local witch Angelique Bouchard (Green), local gentleman and squire Barnabas Collins (Depp) is cursed to spend eternity in a vampire state and buried six feet under by the superstitious townsfolk of Collingsport, New England.

Escaping from his entrapment, Barnabas emerges two hundred years later into the post hippy world of the Seventies where the vampire discovers his modern day ancestors fallen on hard times and attracting the vengeful manipulation of a certain witch seemingly unchanged by the passing centuries.

Barnabas will team with current day family matriarch Elizabeth Collins Stoddard (Pfeiffer) to restore the family name and break the spell held over the dynasty by the scheming Bouchard.

Meanwhile, the arrival of new governess Victoria Winters (Heathcote) into the halls of Collinwood Manor strangely awaken memories of past lives and lost love.

Emerging from the imagination of creator Dan Curtis, Dark Shadows was an oddity broadcasted out on the airwaves of American daytime television between 1966 and 1971.

The show combined a bizarre mixture of horror motifs and soap opera theatrics that failed to cross over the pond to Britain but certainly lingered in the mind of Johnny Depp long enough to ensure that the trashy saga of witches, vampires and other unearthly creatures of the night would live again four decades after its original incarnation ended.

Depp has yet again teamed with long time collaborator Tim Burton to bring a fresh and garishly colourful reimaging of the soap opera to the big screen with a stylish cast that includes Burton regulars Helena Bonham Carter and Christopher Lee.

Burton is famous for his wonderfully realised fantasy environments, misfit characters and fairytale themes whilst the premise offered by Dark Shadows should have marked a return to form after the lacklustre Alice in Wonderland (2010), a film that witnessed the director eschew any form of narrative in favour of a heavily laden and easily forgettable feast of computer generated imagery.

In a nutshell, there should be enough in the assembled rogues gallery of small town witches, vampires and dysfunctional family figures to provide an engaging and entertaining viewing experience.

However, Dark Shadows seems to be a film with an identity crisis and a movie that although highly enjoyable emerges as a frustrating mishmash of ideas and genres that fail to blend into a cohesive whole.

Burton seems unsure whether the heart of his film is a small town horror, modern fairy tale or just a good natured lampooning of its soap opera based source material.

Quite often the film leans towards the family orientated (although there are some wonderfully funny moments of adult humour) entertainment reminiscent of the nineties adaptation of The Adams Family whilst occasionally switching to moments of straight horror and melodrama are reminiscent of the work undertaken by Burton and Depp in the excellent Sweeney Todd (2007) and Sleepy Hollow (2000).

There is also enough clichÃ© dialogue delivered and outlandish character development implemented to ensure that the soap element of the original television show is maintained but it's an uneasy and often unbalanced blend that leaves the viewer deciding the exact nature of the film.

Visually, Dark Shadows is another Burton classic with the opening scenes harkening back to the director's successful screen adaptation of Sweeney Todd (2006) whilst the retro setting of Collinsport could easily double for the backdrop to seventies vampire classic Salem's Lot.

Colour as always plays a major part in any Burton movie and the occasional pale gothic palette (smeared in blood red) is often washed away with brightly garish and heightened colours reminiscent of the director's classic supernatural comedy Beetlejuice (1988).

Depp has fun with the double take and hamming it up as the vampire matriarch out of time whilst his powers of hypnotism surely recall the actor's finest moment portraying Dracula star and screen legend Bella Lugosi in what is also undoubtedly Burton's finest film, Ed Wood (1994).

Pfeiffer seems at home playing the straight role of moral compass and family patriarch, toeing the line and blasting a shotgun whilst Heathcote's spaced out and troubled governess is suitably bewitched throughout proceedings in a role that may or not may hint at reincarnation.

But Green is the star of the show with her venomous and voluptuous witch providing the pantomime villainy and sexual innuendo with a literally body turning finale that bears some similarities to the effects used to twist Goldie Hawn and Meryl Streep inside out in Roberts Zemeckis' comedy, Death Becomes Her (1992).

With rising starlet ChloÃ« Grace Moretz in bratish mode and Johnny Lee Miller having fun as the trashy and lecherous brother of Pfeiffer's family head, not to mention a bizarre ballroom cameo by Alice Cooper, there's certainly enough ideas thrown in the witches cauldron, but as a cohesive piece of cinema Dark Shadows is a jumbled mess of genres, tones, comedy and drama.

Likeable and fun but also frustratingly unbalanced and at times predictable, Dark Shadows is a flawed but interesting watch. Worth a look. 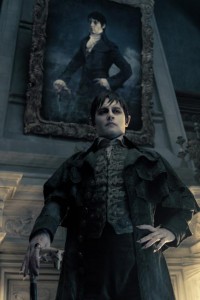 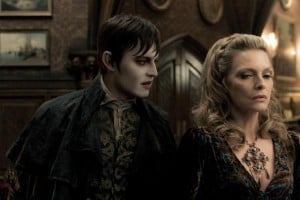