Polls just out have shown that an overwhelming 62% of voters back David Cameron's decision to veto the new proposed EU treaty.

According to a poll conducted by The Mail on Sunday, the Prime Minister's move has also given his party a boost in the opinion polls placing them neck and neck with the Labour party taking away the opposition lead.

Another interesting fact is that in many opinion polls UKIP are ahead of the Liberal Democrats, which when combined with the 62% support for Cameron's squaring up to the EU, gives a clear picture of how the British people feel about the EU dominating British politics.

Iain Duncan Smith's call for a referendum on fiscal union was a call from the very core of the Conservative party for some kind of action to be taken to restore some democratic accountability for the decision making in the way Britain is run.

Nicolas Sarkozy may have swerved to avoid Cameron and German politicians are now looking at punishing the UK to force Britain into a political and fiscal union with the EU, but is that the sort of people we want to make closer ties with?

Merkozy (Sarkozy and Merkel) are now beginning to show their true colours in the political global arena; they are obsessed with the European Union and will do anything including alluding to threats of war and an end to peace in order to maintain their little club.

This alarmist rhetoric by Angela Merkel makes her look like a very dangerous rather than shrewd player on the world stage and reveals more about the determination she has for federalism than the regard to which she holds the democratic process…..and people wonder why some are drawing of parallel lines between the German leadership in the 1940s and those of the present day. 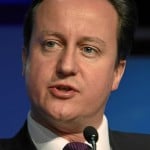 But is the question is, has David Cameron's defiance been a great moment for democracy?

The British people have spoken so have the the politicians responded in accord with the mood of the country? Or was the imminent mass exodus from the Conservative party to UKIP a factor which weighed heavily in this decision?

Well there have been whispers around Westminster for some time now that some senior members of the Conservative party including members of the front bench were ready to stage a high profile move to Nigel Farage's party, which most certainly seems to represent the thoughts and feelings of the majority of Brits.

When you consider the fact that 66% of those polled would like to see a referendum on UK ties to the EU, one must conclude that the democratic process has been suppressed by the government thus far to suit the agenda of the almost religious like belief in the EU and it's centralisation of power and the dream of a federal Europe.

It is backbenchers who make the numbers to legitimise a government, and it would be good for this government to remember that; but more importantly it is voters who place backbenchers into their seats so they also ignore the mood of the country at their peril.

Let's not forget that recent events have proven beyond reasonable doubt that the majority of the political class are not there to serve the British people but to further their own careers and the agendas of groups to which they are affiliated, be they political or more secretive in nature.

The Duke of Edinburgh has injured his ankle