In his parting shot in the New Statesman, David Miliband has urged his brother’s Labour party to stop opposing every spending cut and every measure to fix the welfare system. He urges Labour to adopt fiscal discipline and welfare reform:

“while fiscal stimulus may be a short-term remedy for low demand, fiscal prudence is a medium-term necessity”

“The welfare state needs defence in the face of unfair attacks. But it also needs reform”

“The state needs to do more with less, and that requires big reform”

“Predistribution” does not fit on an electoral pledge card”

"Even David Miliband thinks Labour must change. By opposing every measure we've taken to get the deficit down and fix the welfare system, Ed Miliband has shown that he's too weak to take the difficult decisions needed to turn Britain around.”

“Instead all Labour offer is more borrowing, more spending, and more debt – the same old Labour policy that got us into this mess in the first place.

"And it's hardworking people who would pay the price with higher mortgage rates and higher bills." 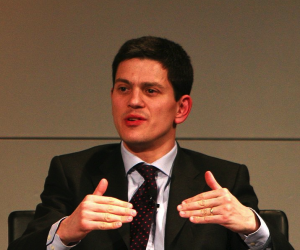