Rt Hon Iain Duncan Smith MP (former leader of the Conservative party and leader of the opposition) and Andy Cook, Chief Executive Centre for Social Justice visited the new David Nieper Academy in Alfreton, Derbyshire to see how the David Nieper fashion house is uniquely putting social justice at the heart of its business plan.

David Nieper Ltd has been one of Alfreton's largest employers for 55 years and one of the few British fashion houses that has never taken production overseas, but has instead prioritised creating jobs for local people and more recently prioritised educating local children.

By becoming the first UK fashion business to sponsor a school and investing significantly in broadening skills across the community, the business is tackling both education failure and worklessness, two of the most detrimental social issues identified by CSJ in their 'Breakthrough Britain' report, making this visit from Iain Duncan Smith and Andy Cook especially poignant.

The Centre for Social Justice (CSJ) was established as an independent think-tank in 2004 to put social justice at the heart of British politics and make policy recommendations to tackle the root causes of poverty. The CSJ is best known for its major Breakthrough Britain reports which identified five pathways to poverty – family breakdown, educational failure, worklessness and dependency, addiction and serious person debt. 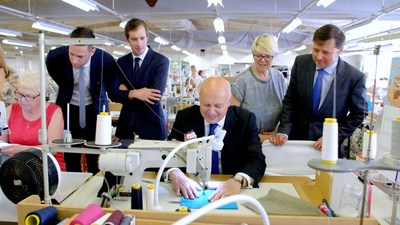 "The David Nieper Academy is exemplary in the way it has tackled the skills shortage in its local area by training up young people in readiness for employment.

"Not only does the British manufacturing industry benefit, people living in the community have the opportunity to gain the skills they need to get a job and progress with their career.

"It is well known the best route out of poverty is through work. Work also provides a regular routine, a means of interaction with a community, a stake in society and a sense of purpose.

"I hope many other businesses see the enormous advantages in investing in our young people so they can fulfil their potential and British manufacturing can thrive in the years to come."

Christopher Nieper, Managing Director of David Nieper Ltd and the founder of the David Nieper Education Trust, believes the only way to secure the future of the business and the town's economic future is to invest in skills.

Alfreton is a former coal mining town and within the 'travel to work' area of Derby, which has been identified by the Government as a social mobility cold spot – i.e. an area with a higher concentration of low paid jobs, low skilled jobs and lower school attainment standards.

The David Nieper Education Trust aims to develop the methodology to turn around a persistently underperforming secondary school (historically in the bottom two percent for attainment) whilst delivering career ready, employable young people for jobs, apprenticeship and further education. The ultimate goal is to ensure that young people in Alfreton have as much opportunity to progress in life as those living in other parts of the UK.

"We are delighted to welcome Iain Duncan Smith and Andy Cook here today, and appreciate their recognition of our endeavours to help secure the future of Alfreton through education and skills. All young people regardless of background should be capable of living fulfilling and productive lives – we are hoping to help them achieve this through our work at the school.

"Similarly, through the development of skills within our own business we are equipping local people with all the skills they need to find gainful employment both within our own company and further afield."

David Nieper works with education at every level, supporting primary schools, secondary education at the David Nieper Academy (built for 850 pupils), sponsoring university bursaries, chairing the government's Trailblazer for the National Apprenticeship standards in sewing and garment technology and their own in-house sewing school.

For further information on The Centre for Social Justice visit http://www.centreforsocialjustice.org.uk/