While world leaders gather in Davos for the annual World Economic Forum, a new report by social justice campaign group Global Justice Now has slammed what it calls the "dangerous delusions" of the summit.

In 2014 Bill Gates, a regular attendee at Davos, made a widely reported statement that, "By 2035, there will be almost no poor countries left in the world."

However, the report shows that since 1981, the number of people living in poverty in sub-Saharan Africa (under $2) has doubled from 288 million to 562 million. Simultaneously, the global rich have become much richer. The world's richest 300 people increased their wealth by 16% in 2013, while new research from Oxfam shows that 80 billionaires have the same wealth as the bottom half of the world's population.

Provocatively titled "The Poor Are Getting Richer and Other Dangerous Delusions," the report uses a mixture of research, analysis and infographics to undermine seven different assumptions about economics and development  promoted by political and business leaders at Davos, including: 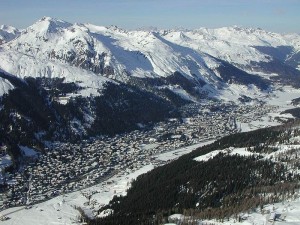 Davos in Winter by Flyout

• The poor are getting richer

• All you need is growth

• Everyone wins under free trade

Alex Scrivener, a campaigner at Global Justice Now and author of the report said:

"The world's elite, who are gathered at their annual strategy meeting in Davos, are encouraging us to believe powerful myths to convince us that their unequal system makes the world a better place. We want to undermine those 'dangerous delusions' to show that their policies are fuelling inequality, poverty and destruction and we need radical change. Poverty is about power – the majority of people can't improve their lives when all the world's resources are monopolised by an ultra rich few."