There’s happiness at the gas pumps. The price of gasoline has been on the decline with the average price in the U.S. down to $3.29 per gallon as of October 28, a year-over-year decrease of $0.27 per gallon. In fact, we could see even lower gas prices on the horizon as oil prices fall.

In this new energy environment in America, the country is becoming more self-efficient in producing oil from its ground thanks to the growing adaptation of fracking technology in North Dakota and Montana to squeeze oil out of the rocks in the ground.

The explosion of oil production from the Bakken region in North Dakota has been superlative and has everyone, including myself, thinking there will be a time when the country will not have to buy oil from the Organization of the Petroleum Exporting Countries (OPEC). In my view, it’s just a matter of time.

And if you add in the rise in oil from the Canadian tar sands, the move to independence in oil demand will become even more realistic. According to IHS, the amount of oil being moved via rail cars could rise to about 700,000 barrels a day by the end of 2015. (Source: Domm, P., “Canadian oil rides south even without Keystone pipeline,” CNBC, November 4, 2013.) The hotly debated Keystone XL pipeline, if it’s ever built, could move 830,000 barrels of oil per day from Canada. 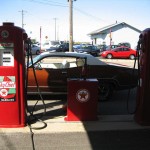 US Gas Pumps by IvoShandor

Clearly, the numbers are there, and unless a crisis in the Middle East surfaces, we could see oil prices continue to decline as domestic and Canadian oil flow rises.

The days of high oil prices may be a thing of the past. The price of West Texas Intermediate (WTI) oil is below $100.00 per barrel and could be headed lower, as shown on the chart below.

WTI oil prices are in a downtrend, as reflected by the downward channel in the following chart. Also notice the downward relative strength index and sell signal exhibited by the moving average convergence/divergence (MACD), as my technical analysis indicates. 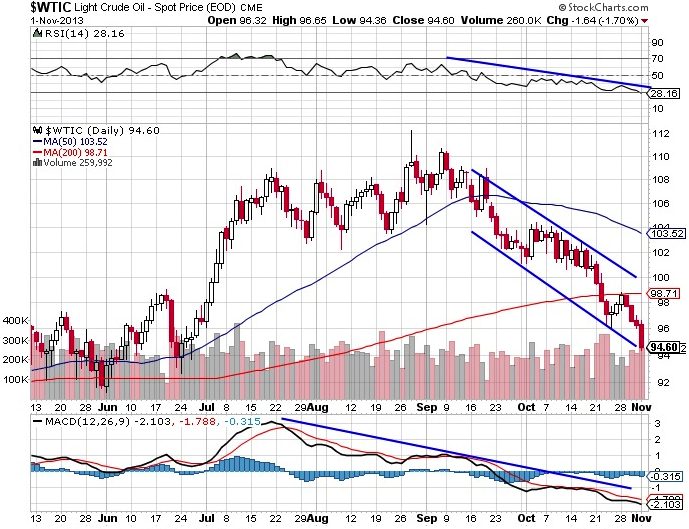 With this in mind, I would be considering buying oil stocks with a presence in North Dakota and Montana, including Continental Resources, Inc. (NYSE/CLR) and Whiting Petroleum Corporation (NYSE/WLL).

This article Days of High Oil Prices a Thing of the Past? was originally published at Investment Contrarians