Death rates among middle aged and older people are higher when the economy is growing than when it's heading for recession, reveals a long term analysis of the economic cycles of developed countries, published online in the Journal of Epidemiology and Community Health.

But increased levels of work stress and traffic accidents, as a result of higher rates of employment, are unlikely to fully explain these trends, suggest the authors.

Life expectancy in the developed world has continued to rise, largely because of the reduction in old age mortality, say the authors. Long term economic growth is an important factor in maintaining this trend, because "wealth creates health," they add.

As many countries are not only in recession, but also increasing the proportion of elderly people in the population, the authors wanted to know what impact this might have on life expectancy.

They therefore analysed the gross domestic product (GDP) per capita—an indicator of national economic health—of 19 developed countries in Europe, Scandinavia, North America and Australasia between 1950 and 2008.

They then plotted the GDP figures against the numbers of deaths among 40 to 44 year olds and 70 to 74 year olds over the same period.

Over the long term, an increase in GDP was associated with a fall in death rates in all 19 countries, but the economic cycles of relative boom and bust told a different story. 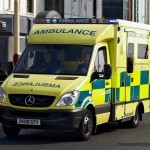 Ambulance by Ingy The Wingy

The authors speculate about the possible explanations for the figures, including increased job stress, but this would not affect older people, and increased air pollution, which is known to go up when economies are thriving, but which doesn't explain the gender differences in the figures.

Unhealthy lifestyles and road traffic accidents increase when economies are in good health, but are unlikely to fully explain the trends, they say.

But changes in social support may exert some influence, they suggest, as higher employment could mean less time for informal care-giving to older people, and heightened stress among the carers, a factor that is worth exploring further in view of the lack of evidence to substantiate this theory, they add.