The construction of the Royal Navy’s new Aircraft Carrier has taken a huge step forward today, as the Defence Secretary witnessed the installation of the ship’s navigation bridge.

During a visit to Rosyth shipyard in Scotland, Philip Hammond oversaw the 700 tonne section being lifted into place on the deck of HMS Queen Elizabeth.

Nearly two thirds of the ship has now been built and the structure is due to be completed by the end of this year. The Carrier is then expected to leave the dockyard in 2014 before beginning her sea trials with the Royal Navy.

The forward island fitted today houses the bridge where the captain and navigation crew will operate. The enormous steel section was built in Portsmouth and transported by barge to Fife, where the Carriers are being assembled. Both HMS Queen Elizabeth and her sister ship HMS Prince of Wales will have two island sections which will provide independent control of navigation and air traffic control operations.

The construction and assembly of the Royal Navy’s Carriers is one of the UK’s biggest engineering projects. Work on the Carriers in Scotland is worth around Â£1.3bn and more than 2,000 staff are working on the ships in Rosyth.

“The addition of the navigation bridge is a significant milestone for HMS Queen Elizabeth, which is now entering the final months of her construction. The workforce at Rosyth should be proud of their involvement in developing the largest and most technologically advanced warships the UK has ever had.

“The Queen Elizabeth Class of Carriers will be in service for up to fifty years, providing the Royal Navy with highly versatile and potent capability that will enable the UK to project its power and carry out a wide range of tasks around the world. Our operational Lightning II Jets are due to arrive in 2016, a year before the HMS Queen Elizabeth sea trials, and the first flights off her deck will start in 2018.”

When construction work on HMS Queen Elizabeth is completed, the blocks of HMS Prince of Wales, which are being built at shipyards across the UK, will begin to be assembled at the dockyard at Rosyth. 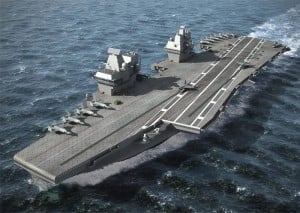 Computer graphic of the Queen Elizabeth Class aircraft carrier showing the vessel without a ski ramp and with folding wing Joint Combat Aircraft on her deck.