Deflation or Inflation: Where Are We Headed?

Since Janet Yellen's ascension to the throne, I mean Chair, of the Board of Governors of the Federal Reserve System, renewed concerns regarding inflation, and to a lesser extent, deflation abound. The specter of inflation is of particular concern to Yellen as evidenced by an exchange with Alan Greenspan on the subject in 1996 when she was a Fed governor in her second year on the board.

The novice Ms. Yellen was extremely concerned with the prospect of an inflationary trend; so much so, that she took her fears to the top (Greenspan). Although the details of the encounter [1] vary, she was clearly at odds with Greenspan's assessment of the economy at the time, but nonetheless stood behind his decision against an interest rate increase.

Prospects for Inflation in the United States

Unemployment in the United States remains high, well above the unemployment rates experienced immediately prior to the financial crisis of 2008.

Meanwhile, the Fed has made modest reductions in its quantitative easing strategy which has resulted in slight increases Treasury bill yields. With the Fed funds rate at zero, quantitative easing has been the tool of choice for stimulating economic growth. Opinions vary greatly on how successful this strategy has been. Clearly, it has been a positive experience for the equities markets, but has fallen short of its goal to ease credit and much of the money created by QE is bolstering money center bank reserves as opposed to revitalizing economic growth through commercial and mortgage lending.

Forecast for Deflation in the U.S. Economy

Deflation or lowflation is considered by some as a real possibility in the United States, but most view deflation as unlikely. When you consider the classic definition of deflation as being too few dollars chasing too many goods, the concept of deflation in the U.S. economy pales in comparison to the probability of inflation; if one can be certain of anything in regard to the economy of the United States, it is that the money supply is robust.

However, trends indicate that this money is not finding its way to the consumers' pocketbook. Workers in the United States are experiencing significant declines in purchasing power, not because of inflation, but because wages are shrinking. Household incomes have contracted by as much as 4.8 percent since the recession was declared to be at an end in June 2009 and this is an inflation-adjusted percentage. 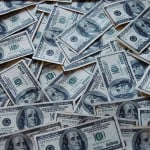 According to the chief economist of Denmark's Saxo Bank, Steen Jakobsen, there is 25:75 risk of deflation in the United States. That's comforting, but nonetheless, there is a risk factor. In a consumer driven economy like that of the United States, a healthy middle class with an income stream that is constantly increasing creates the demand that is the driver of economic growth.

The classic signals of deflation are high unemployment rates, extremely low interest rates, unusually low inflation and falling non-precious metal prices. All these signals are present in the U.S. economy.

Ironically, any efforts the Fed may undertake to mitigate these signals are likely to trigger an inflationary trend. Rising interest rates, for example, would motivate banks to lend, potentially fueling the fires of industry, creating jobs and competitive wages, all of which would stoke the fires of inflation.

The heady days of robust GDP growth are behind us. The United States is well on the path the Japanese have been trekking for more than two decades. The United States will not see inflation nor will it experience deflation. Instead, it would appear the status quo is going to be in place for the foreseeable future. Welcome to the new normal.

Andrew Cravenho is the CEO of CBAC, which offers invoice factoring for small businesses. As a serial entrepreneur, Andrew focuses on helping both small and medium sized businesses take control of their cash flow. Prior to CBAC, Andrew founded an annuity financing company relieving tort victims of financial hardship.