Long gone are the days of easy money, so it seems. Junior energy companies are finding today’s capital to be more expensive and harder to access.

In the current market, juniors are fighting an ongoing battle just to balance sustainable growth, manage debt, and to compete with peers for dollars that just aren’t there. When assessing a junior, one must look at how they put their budgets together and maintain them if they’re to survive out there in the wild.

This isn’t a new phenomenon either, as a 2011 study of post-recession capital markets performed by the Society of Petroleum Engineers inferred that, “Upstream energy companies now compete not only for preferred access to the best new hydrocarbon resources but also for credit from capital markets.”

It’s time to point out the obvious. There’re not a lot of positive scenarios out there for these small caps.

The problem today is that many companies have to strap themselves in and take on debt, which puts them at great risk: Deliver or die.

The reality is that the rise of unconventional resource plays, along with the increased use of horizontal drilling and complex completions have driven prices through the roof. A company going to the street to raise $5-10 million for one horizontal well is really exposing itself. Even if they hit on their first well, the market can be unforgiving when a company comes knocking on the door of the coffers once again.

Lord help you if the well is a bust. When you’re a junior, you can’t bury the past behind 6 or 7 other wells with a huge capital budget. In reality they only raise a big enough budget for one high-cost well, and there’s no room for error.

The banks have also been unsympathetic, as the disposition market continues to dry up. Companies don’t have the opportunity they’ve had in the past to sell assets in order to get cash like they used to. That option is also closed.

So what’s a junior to do?

This is where it might be beneficial to look at two peer companies coming at the same problem with different methods, but similar strategies: Blackbird Energy [TSX.V: BBI] and Edge Resources [TSX.V: EDE].

Both are completely aware of the challenges ahead, and share roughly the same market cap while at the same time run programs consisting of lower-risk growth plans.

“This is quite frankly the biggest ‘show me’ market I’ve ever seen,” says Garth Braun, President and CEO of Blackbird Energy.

“If you can succeed in actually showing people your potential through your results, only then will you see movement. So you must show the investor that not only can you make them money, but that you have a suitable portfolio of assets and a stream of activity to come that you can sustain.”

Braun’s team is coming off of a very successful private placement capital raise that resulted in an oversubscription to the tune of $3.1 million. With a diversified asset portfolio that includes many (to steal a baseball analogy) singles and doubles on its low-risk Mantario properties, as well as a large land base with a high price tag within two areas of the highly sought after Montney play.

In order to keep up with his gameplan, Braun and his team intend to drill several of these low-risk Mantario wells over the next year. Given the examples led by their Mantario predecessors Rock Energy [TSX: RE], it’s plausible to predict that if Blackbird can repeat Rock’s successes they’ll be able to drill, complete and tie-in these wells at a cost of only $750,000 for production on average of 75 bbls/d each, picking up their production totals along the way.

But while Blackbird can easily afford to continue drilling these shallow conventional wells, it’s the big potential on their Montney real estate that has the potential to make the needle move. Surrounded in the Bigstone region by majors such as Kelt Exploration [TSX: KLT] and Delphi Energy [TSX: DEE], Blackbird knows that it’s sitting on some very valuable land that continues to grow in value as its neighbours drill.

Courting a major into a carried interest can only serve to help increase the value of the company going forward and production—all without having to take on the risk of going it alone. On the flipside, it would take the team a very long time to generate the kind of cash needed internally to take the higher risks necessary when elephant hunting in the Montney.

“The only way a junior can truly capitalize their program and fund their growth is through internal generation of cash,” says Brad Nichol, President and CEO of Edge Resources.

“Unfortunately, most juniors have to deal with Recycle Ratio, which is in a sense the profit to investment ratio. If you put a dollar in, how many dollars do you get out?”

Typically right now the average profit to investment ratio that companies are operating under is approximately 1.5. That means for every $1 they put into the ground, they get $1.50 out (over the life of the well).

“My profit to investment ratio is 3.5. I’m generating cash through investing into the ground and drilling wells that I know will generate much more cash then I put in,” says Nichol. 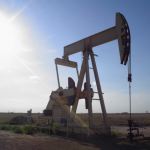 Texas Pump Jack by Ficelloguy at the English language Wikipedia

Much like Braun’s Mantario properties, Nichol’s Edge Resources is touting low-cost, low-risk production growth on its Eye Hill project. Both the Eye Hill and Mantario give each company the potential for pay out in roughly 6-8 months.

“I’m focusing on conventional shallow wells (as opposed to unconventional costly horizontal wells). With each one, I’m only risking $650,000 capital all in, and that’s not even the risk capital,” says Nichol. “That’s just the capital requirement to get me a producing well.”

“I’m spending less capital and getting a better result. I’m paying back the capital in 6 months or less, and I’m generating 3.5x the capital we put in. That’s the key to Edge Resources, and what makes us unique.”

Recent news from both companies has shown a different strategy in terms of raising money. Edge Resources has gone the debt route, while Blackbird went the equity route. The debt option was still open for Edge, perhaps because of the healthy recycle ratios, which don’t scare the bankers away from the teller window. For Braun’s strategy, there was still quite a bit of interest when he went to the market with some valuable additions to the company portfolio that lured in new investors (Disclosure: that includes this author on the most recent private placement).

“I’m not against debt if it’s in essence well serviced and I have ready access to the equity markets to replace it,” says Braun. “We felt we were at a point where in essence we originated all of our oil plays and now we’re focusing on drilling them up. It was premature for Blackbird to go and take debt on. It was offered to us but I felt it was too risky for our shareholders to be exposed to that kind of debt.”

“We wanted to drill up the assets and prove it. We felt there would be a material-value move to our company, and I wasn’t willing to take the risk on putting a date of failure on if I wasn’t able to raise equity. So with our private placement it does indeed cause some dilution, but the bonus is that I don’t have a proverbial Sword of Damacles in the form of a milestone date over my head. Instead, we worked to rally together a group of investors that wanted to invest in our company and see us grow through that investment.”

Blackbird’s most recent operational update hints towards a new milestone on Mantario. Production on it's A15-6 well has officially been announced, with results soon to come in the next 15 days. As well, the company picked up an additional 18 sections (11,520 acres) of P&NG rights in the Greater Karr area, all of which include deeper rights like the highly prospective Duvernay formation. Should Blackbird continue to drill Mantario while dangling the Duvernay, they should be able to continue to make their new set of investors happy.

By. G. Joel Chury of Oilprice.com