• The most commonly 'botched' DIY tasks are painting and decorating, applying bath sealant and tiling

More and more British homeowners are calling in professionals to repair damage caused by their own botched attempts at DIY.

According to new research from LV= home insurance, an increasing number of Brits are unsuccessfully attempting DIY jobs. In the past five years, two million[1] Brits have ruined a DIY job and one in 20 (5%) had to call out an expert to fix it – a figure which has increased year on year since 2010[2].

The jobs most likely to go wrong include painting and decorating (32%), applying sealant around a bath or shower (18%), tiling (16%), plastering (13%) and filling a hole or crack in the wall (12%). In fact, Brits have forked out £67 million[3] collectively to get professionals in to rectify their attempts so far this year.

Close to one in 20 Brits (4%) have damaged their property as a result of poor DIY. The most common types of damage caused as a result of poor DIY are cosmetic (49%) such as spilling paint. However over a quarter (26%) of DIY disasters have caused water damage and a further 16% resulted in electrical faults. Many DIYers (16%) have also damaged the fabric of their property by, for example, putting their foot through the loft floor or smashing a hammer through a wall. 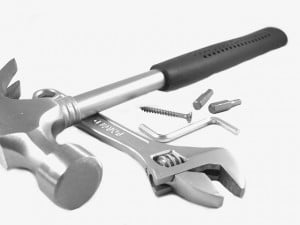 Most amateur DIY attempts start from a desire to save money. In total, 85% of Brits who attempted DIY did so because they thought it would be cheaper to do the jobs themselves rather than hiring a professional, while 22% thought the job would be relatively easy to complete.

Over-ambition and lack of knowledge are among the main causes of DIY disasters. Among all those that caused damage in their home, the majority didn't know what they were doing (36%) while many said the job was just too complicated (18%). Furthermore, close to one in four (24%) blamed their tools for the job going awry.

The rise of online tutorial videos has exacerbated the problem, with complicated do-it-yourself looking too easy. Close to one in 10 (8%) Brits who have attempted DIY say they did so after watching an online tutorial video as it gave them the confidence to 'have a go.' Yet many DIY enthusiasts have attempted to have a go at potentially dangerous tasks – such as electrical repairs (29% of DIY enthusiasts), roofing work (8%) and knocking through a wall (4%). And some Brits say they would even attempt gas appliance repairs (3%) or remove asbestos (2%) without professional help.

For specialist jobs involving gas, electrical, plumbing or structural work, it is essential to call in the professionals to ensure the work meets current safety and building regulations, otherwise homeowners risk invalidating their home insurance policy if things go wrong.

"August bank holiday is a key time for homeowners to get out their tools and undertake some DIY, but homeowners need to be realistic about how much they can achieve without professional help. Our advice to anyone attempting home improvements this bank holiday weekend is to be realistic about whether you have the skills and the time to undertake such a task, and to take all the necessary precautions to avoid damaging your property or injuring yourselves. In the past five years one in 10 (10%) Brits have made a claim on their insurance policy as a result of damaging their home through botched DIY – so it is important that homeowners know what they are doing before they start a job."