Much alike Bob Geldof, Alex Salmond has achieved a great deal in his career. Whilst the former has raised his projects to the forefront of public consciousness, Salmond has taken his party to the corridors of power. Sir Bob may be a unionist, but it is unlikely that Salmond admires no more of him than his non-British citizenship.

Both men remain entirely committed to their respective causes and, although Salmond has now left the SNP's leadership, his party continues the crusade. However, as a democrat and a Scot by birth, one may question the means by which they do so. In the somewhat-altered words of Geldof's Band Aid, "Do they know they lost the vote at all?"

The Independence Referendum was described by Salmond as a "once in a lifetime" occurrence. The result was to be final. Yet here we are two months after the people of Scotland decided to remain a part of the UK family, and the SNP are obsessively attempting to manoeuvre a second referendum.

The SNP proposed the original referendum, a democratic mode of resolving the issue, but since the electorate gave them the 'wrong result' they have become explicitly anti-democratic. Their dogmatic wish for a second vote is surpassed only by the EU demands for Geldof's Ireland to rethink its opinion of the Lisbon Treaty in 2009.

Scotland deserves better than to be treated as though it was too stupid to get it right first time round. The SNP may not like the result, but it must respect it. 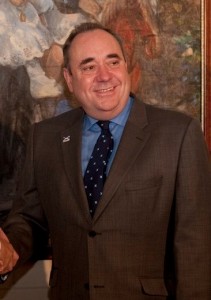 The party has slandered almost the entire media as biased against independence, and now openly endorses a new nationalist newspaper. Imagine that, a government explicitly supporting one newspaper- one opinion- above all others.

This is not a distressing warning from history, this is happening right now.

I do highly doubt that their intentions were to appear in this way, but at the very least the SNP government forget that they are meant to represent the views of an entire nation, not merely the nationalistic obsessions of their supporters.

Unless these supporters leave the issue alone, Scotland's fresh wounds and divisions will never heal. As one commentator put it "Half of us now hate the word Yes, and the other half hate the word No." Who could forget high profile SNP member Jim Sillars' call for a "day of reckoning" for unionist businesses? That kind of division is not the ideal founding of a cohesive society.

Alex, Nicola and the rest of the SNP, "there's a world outside your window" and your nationalisms seriously risk turning it into one "of dread and fear". The vast majority of Scots opposed your idea. An even greater majority wishes to see no further debate on it.
If you truly do hold Scotland's interests as greatest of all, then accept the democratic result and move on.

With apologies to Bob Geldof.

It's now up to the Tories