Something is wrong with Doctor Who and it is not the plot or characterisation which is at fault, it is the backing music that is in need of a complete overhaul.

Matt Smith's tenure at the helm of the Tardis has ended and lets hope the music will also regenerate along with him.

Don't get me wrong, the quality of the composition involved in the soundtrack is superb, it's just not appropriate to the content and a bad call has been made at the production (almost certainly at an executive behest) level where the pizzicato and staccato  strings played continuously around scenes of the Doctor sound like they took a CD with the Desperate Housewives soundtrack and threw it on top just because they could synch it up.

I can recognise the necessity in a production call whereby something buoyant in the musical department was requested to match Matt Smith's energetic portrayal but ironic juxtaposition works more effectively than direct representation.

One of the most iconic theme tunes in the history of Sci-Fi has already lost it's spookiness in recent times and I am sure Delia Derbyshire and Ron Grainer must be turning in their respective graves at how all the sinister musical overtones have been exterminated (pun intended).

It  seems almost as if Doctor Who has been repackaged to suit the American auditory and visual palette at the expense of its very soul.

The inappropriateness of music did not end with Matt Smith's bouncy scenes, it ruined Peter Capaldi's Christmas day entrance to the show. What could have been a magical moment of tenderness and wonderment was turned into a farce with a generic action adventure staccato section of music more suited to Indiana Jones than a British Sci-Fi.

Because of this ill thought out music segment, Capaldi's performance was lost.

…okay the line about not liking the colour of his kidneys was just about as bad a line as could have been mustered and no audio could ever have covered that up. 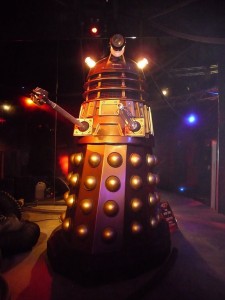 The grandiose cinematic orchestral doesn't work with Doctor Who and diminishes the impact of the actor's deliverance, instead a much more sinister approach is needed possibly returning to Doctor Who's roots of using analogue electronic sounds to appropriate emphasis or at the very least a more controlled orchestral score.

I must reiterate what I said at the start – and that is the fault here does not lie with the composers, but rather with whoever said "I know lets make Doctor Who bigger and that includes the soundtrack".

The Doctor Who I grew up with in the late 70s and early 80s was scary (as I am sure it was in the 60s) not because of its huge scale but because of it's claustrophobic visuals and audio bringing the Doctor and the viewer closer together.

Saturating the audio with big strings, brass and thundering percussion destroys such intimacy, in the case of Doctor Who less is definitely more.

Come on Moffat and Co……you could either destroy Peter Capaldi's Doctor or enhance him, after all he really is one of Britain's best actors and deserves to have his character matched with an appropriate soundtrack/audio approach.