Amy is trapped in a quarantine facility for victims of an alien plague, a plague that will kill the Doctor in a day.

The Doctor can use the Tardis to smash through time and break in, but then Rory is on his own. He must find Amy and bring her back to the Tardis before the alien doctors can administer their medicine.

Rory is about to encounter a very different side to his wife. Can he rescue Amy before she is killed by kindness?

Saturday night with the good Doctor has become an increasingly complex viewing experience with the emphasis quite clearly on serial rather than series as the much debated story arc that encompasses both Season Five and Six gradually heads towards it’s climax.

But en-route to head writer Stephen Moffat’s final revelation, the stand alone adventure screened last night gave the viewer a chance to focus on the increasingly developed and likeable relationship between the Tardis’ onboard couple as the Doctor took a backseat to allow Amy and Rory to take centre stage in an adventure that combined the time travelling paradoxes of H. G. Wells with the fairytale adventures of Lewis Carroll.

The show’s producers can be commended for the visuals on display with the garden environment encountered by Amy closely resembling the animated fantasy world built by Tim Burton for his recent and rather bland re-imaging of Alice in Wonderland (2010).

The garden world also contrasted nicely with the slick, stylised and sterile interiors of both the arrival complex and the quarantine compound which visually gave a nod to the classic white futuristic interiors found in 2001: A Space Odyssey (1968).

The Doctor being at risk from a planet engulfing virus and thus confined to the interior of the Tardis provided a simple and convenient plot device to allow the episode to examine the friendship between the Time Lord and Rory whilst also giving the viewer a closer insight into the married relationship between the reluctant time travelling nurse and his feisty wife which has become one of the show’s regular highlights.

Karen Gillan delivered on the potential of the story with a remarkable performance that combined the youthful and adventurous Amy that we know with a galaxy weary and aged future self, embittered with the knowledge that the Doctor had not saved her from a stranded fate.

Full marks must also go to the BBC make-up department who creepily managed to age the beauty with subtle and realistic results.

Plot developments also allowed Rory to question the sometimes frivolous attitude of the Doctor towards his travels and the subsequent danger that he places his often youthful and wayward companions in.

Confronted between the present and future incarnations of his wife and a moral dilemma that played on the repercussions of time travel, the episode seemed to mirror last season’s excellently realised adventure Amy’s Choice, the story also emphasised the way in which Davill’s character and acting ability have come to provide the sense of reason in the increasingly helter skelter adventures of the Time Lord. 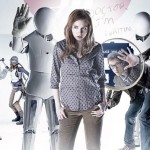 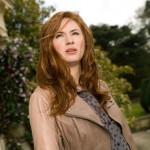 Here at TEV we are currently divided over Season Six with some loving the plot twisting developments favoured by Moffatt and others fearing that the show may be abandoning it’s home grown charm for the mass market of America.

But there’s no denying that The Girl Who Waited was a visually lush and emotionally driven adventure that lit up a rather predictable and mundane night on the box.

What starts out as a potentially whimsical and simplistic plot device develops into an emotional tour de force allowing not only the Doctor’s companions to take centre stage but to investigate an increasingly more complex and darker side to the Time Lord himself. Recommended.