September's Federal Reserve policy meeting is approaching and there is an increasing focus on the likely policy path adopted by the central bank. The current debate appears to be divided into two camps.

First, there are those investors who believe that the Fed should continue to maintain its zero interest rate policy (ZIRP), given increasing external risks as emerging economies' growth slows. While a 25 basis point Fed rate hike is small beer on an absolute basis, the psychological impact would have a significant impact on emerging market financial assets, which have shown vulnerabilities in recent weeks, and might start to feed through into the real economy. Furthermore, the disinflationary impulse which has been rekindled through lower energy prices argues that there is no immediate need to raise interest rates. Recent US dollar strengthening has also acted as a tool to tighten monetary conditions in the US.

The opposing view maintains that the Fed should exit its zero interest rate policy as soon as possible. Keeping the current policy stance is detrimental to the efficient allocation of capital over the longer term, potentially a situation giving rise to the creation of 'zombie' companies, as experienced in Japan in the 1990s and early 2000s. Therefore, by returning to a more normalised interest rate environment, albeit a lower one than seen in recent history, more efficient investment should encourage more innovation, leading to higher levels of productivity and economic growth, as well as higher investment returns over the longer term. 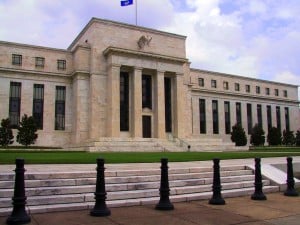 We have long held the belief that Fed policymakers will want to move forward and tighten monetary policy. While we remain fairly agnostic on the specific timing of the first Fed rate rise, we believe that the first hike is more likely to come in 2015 than in 2016. Of course, we acknowledge that global markets are fragile against a backdrop of slowing growth in emerging economies and depreciating commodity prices.  However, Fed tightening has been well flagged and emerging economies' public finances are better able to withstand a Fed hiking cycle (and probably a shallow one) than in the past.

On the domestic side, US growth remains solid and we remain optimistic about the economy's prospects. Quantitative easing was only ever meant to be temporary to support the US economy out of the depths of the 2008 crisis.

There have been concerns around the US manufacturing sector, which has been set back by the mining and energy sectors and a strong US dollar. Rising inventory levels might further impede growth in the third quarter. Nonetheless, manufacturing represents a smaller share of overall US economic growth, approximately 12% according to the Commerce Department.

The US economy's overwhelming focus is domestic demand and that makes it more sheltered from external risks relative to other major economies, such as the euro-area and Japan. If we were to see a significant deterioration in the services sector, a scenario that we are not anticipating, then that would give us more reason to worry.  However, the latest US Services Business Index Activity Index in August highlights that the pace of expansion remains robust. Meanwhile, we should not forget that a lower oil price should also be supportive to the US consumer.

Our view is that the initiation of the Fed tightening cycle should not alter the fundamentals of the US economy, which remains in good shape. The impact on market sentiment will be important, however. Therefore, we expect the Fed to increase interest rates very gradually which should allow risk-asset markets the stamina to absorb any change in policy stance, although investors should expect periods of volatility.

MPs sleeping rough – in the Palace of Westminster